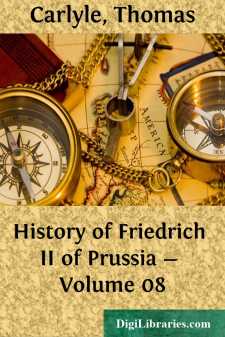 Chapter I. — CHAPLAIN MULLER WAITS ON THE CROWN-PRINCE.

Friedrich's feelings at this juncture are not made known to us by himself in the least; or credibly by others in any considerable degree. As indeed in these confused Prussian History-Books, copulent in nugatory pedantisms and learned marine-stores, all that is human remains distressingly obscure to us; so seldom, and then only as through endless clouds of ever-whirling idle dust, can we catch the smallest direct feature of the young man, and of his real demeanor or meaning, on the present or other occasions! But it is evident this last phenomenon fell upon him like an overwhelming cataract; crushed him down under the immensity of sorrow, confusion and despair; his own death not a theory now, but probably a near fact,—a welcome one in wild moments, and then anon so unwelcome. Frustrate, bankrupt, chargeable with a friend's lost life, sure enough he, for one, is: what is to become of him? Whither is he to turn, thoroughly beaten, foiled in all his enterprises? Proud young soul as he was: the ruling Powers, be they just, be they unjust, have proved too hard for him! We hear of tragic vestiges still traceable of Friedrich, belonging to this time: texts of Scripture quoted by him, pencil-sketches of his drawing; expressive of a mind dwelling in Golgothas, and pathetically, not defiantly, contemplating the very worst.

Chaplain Muller of the Gens-d'Armes, being found a pious and intelligent man, has his orders not to return at once from Custrin; but to stay there, and deal with the Prince, on that horrible Predestination topic and his other unexampled backslidings which have ended so. Muller stayed accordingly, for a couple of weeks, intensely busy on the Predestination topic, and generally in assuaging, and mutually mollifying, paternal Majesty and afflicted Son. In all which he had good success; and especially on the Predestination point was triumphantly successful. Muller left a little Book in record of his procedures there; which, had it not been bound over to the official tone, might have told us something. His Correspondence with the King, during those two weeks, has likewise been mostly printed; [Forster, i. 376-379.] and is of course still more official,—teaching us next to nothing, except poor Friedrich Wilhelm's profoundly devotional mood, anxieties about "the claws of Satan" and the like, which we were glad to hear of above. In Muller otherwise is small help for us.

But, fifty years afterwards, there was alive a Son of this Muller's; an innocent Country Parson, not wanting in sense, and with much simplicity and veracity; who was fished out by Nicolai, and set to recalling what his Father used to say of this adventure, much the grandest of his life. In Muller Junior's Letter of Reminiscences to Nicolai we find some details, got from his Father, which are worth gleaning:—

"When my Father first attempted, by royal order, to bring the Crown-Prince to acknowledgment and repentance of the fault committed, Crown-Prince gave this excuse or explanation: 'As his Father could not endure the sight of him, he had meant to get out of the way of his displeasure, and go to a Court with which his Father was in friendship and relationship,'"—clearly indicating England, think the Mullers Junior and Senior....