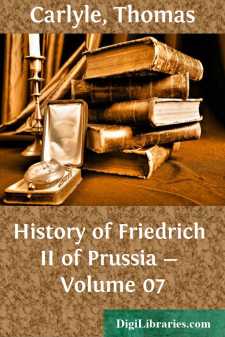 Chapter I. — ENGLAND SENDS THE EXCELLENCY HOTHAM TO BERLIN.

Things, therefore, are got to a dead-lock at Berlin: rebellious Womankind peremptorily refuse Weissenfels, and take to a bed of sickness; inexpugnable there, for the moment. Baireuth is but a weak middle term; and there are disagreements on it. Answer from England, affirmative or even negative, we have yet none. Promptly affirmative, that might still avail, and be an honorable outcome. Perhaps better pause till that arrive, and declare itself?—Friedrich Wilhelm knows nothing of the Villa mission, of the urgencies that have been used in England: but, in present circumstances, he can pause for their answer.

MAJESTY AND CROWN-PRINCE WITH HIM MAKE A RUN TO DRESDEN.

To outward appearance, Friedrich Wilhelm, having written that message to Baireuth, seems easier in mind; quiet with the Queen; though dangerous for exploding if Wilhelmina and the Prince come in view. Wilhelmina mostly squats; Prince, who has to be in view, gets slaps and strokes "daily (JOURNELLEMENT)," says the Princess,—or almost daily. For the rest, it is evident enough, Weissenfels, if not got passed through the Female Parliament, is thrown out on the second reading, and so is at least finished. Ought we not to make a run to Dresden, therefore, and apprise the Polish Majesty? Short run to Dresden is appointed for February 18th; [Fassmann, p. 404.] and the Prince-Royal, perhaps suspected of meditating something, and safer in his Father's company than elsewhere, is to go. Wilhelmina had taken leave of him, night of the 17th, in her Majesty's Apartment; and was in the act of undressing for bed, when,—judge of a young Princess's terror and surprise,—

"There stept into the anteroom," visible in the half-light there, a most handsome little Cavalier, dressed, not succinctly as Colonel of the Potsdam Giants, but "in magnificent French style.—I gave a shriek, not knowing who it was; and hid myself behind a screen. Madam de Sonsfeld, my Governess, not less frightened than myself, ran out" to see what audacious person, at such undue hour, it could be. "But she returned next moment, accompanying the Cavalier, who was laughing heartily, and whom I recognized for my Brother. His dress so altered him, he seemed a different person. He was in the best humor possible.

"'I am come to bid you farewell once more, my dear Sister,' said he: 'and as I know the friendship you have for me, I will not keep you ignorant of my designs. I go, and do not come back. I cannot endure the usage I suffer; my patience is driven to an end. It is a favorable opportunity for flinging off that odious yoke; I will glide out of Dresden, and get across to England; where I do not doubt I shall work out your deliverance too, when I am got thither. So I beg you, calm yourself, We shall soon meet again in places where joy shall succeed our tears, and where we shall have the happiness to see ourselves in peace, and free from these persecutions.'" [Wilhelmina, i. 205.]

Wilhelmina stood stupefied, in silence for some moments;—argued long with her Brother; finally got him to renounce those wild plans, or at least postpone them; and give her his word that he would attempt nothing on the present occasion....