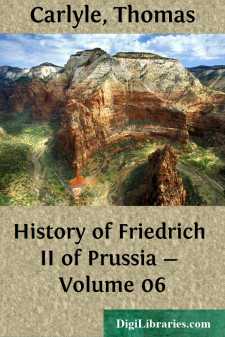 Chapter I. — FIFTH CRISIS IN THE KAISER'S SPECTRE-HUNT.

The Crown-Prince's young Life being, by perverse chance, involved and as it were absorbed in that foolish question of his English Marriage, we have nothing for it but to continue our sad function; and go on painfully fishing out, and reducing to an authentic form, what traces of him there are, from that disastrous beggarly element,—till once he get free of it, either dead or alive. The WINDS (partly by Art-Magic) rise to the hurricane pitch, upon this Marriage Project and him; and as for the sea, or general tide of European Politics—But let the reader look with his own eyes.

In the spring of 1727, War, as anticipated, breaks out; Spaniards actually begin battering at Gibraltar; Kaiser's Ambassador at London is angrily ordered to begone. Causes of war were many:

1. Duke de Ripperda—tumbled out now, that illustrious diplomatic bulldog, at Madrid—sought asylum in the English Ambassador's house; and no respect was had to such asylum: that is one cause.

2. Then, you English, what is the meaning of these war-fleets in the West Indies; in the Mediterranean, on the very coast of Spain? We demand that you at once take them home again:—which cannot be complied with.

3. But above all things, we demand Gibraltar of you:—which can still less be complied with. Termagant Elizabeth has set her heart on Gibraltar: that, in such opportunity as this unexpected condition of the Balances now gives her, is the real cause of the War.

Cession of Gibraltar: there had been vague promises, years ago, on the Kaiser's part; nay George himself, raw to England at that date, is said to have thought the thing might perhaps be done.—"Do it at once, then!" said the Termagant Queen, and repeated, with ever more emphasis;—and there being not the least compliance, she has opened parallels before the place, and begun war and ardent firing there; [22d February, 1727 (Scholl, ii. 212). Salmon, Chronological Historian (London, 1747; a very incorrect dark Book, useful only in defect of better), ii. 173. Coxe, Memoirs of Walpole, i. 260, 261; ii. 498-515.] preceded by protocols, debates in Parliament; and the usual phenomena. It is the Fifth grand Crisis in the Kaiser's spectre-huntings; fifth change in the color of the world-lobster getting boiled in that singular manner;—Second Sputter of actual War.

Which proved futile altogether; and amounts now, in the human memory; to flat zero,—unless the following infinitesimally small fraction be countable again:—

"Sputtering of War; that is to say, Siege of Gibraltar. A siege utterly unmemorable, and without the least interest, for existing mankind with their ungrateful humor,—if it be not; once more, that the Father of TRISTRAM SHANDY was in it: still a Lieutenant of foot, poor fellow; brisk, small, hot-tempered, loving, 'liable to be cheated ten times a day if nine will not suffice you.' He was in this Siege; shipped to the Rock to make stand there; and would have done so with the boldest,—only he got into duel (hot-tempered, though of lamb-like innocence), and was run through the body; not entirely killed, but within a hair's breadth of it; and unable for service while this sputtering went on....