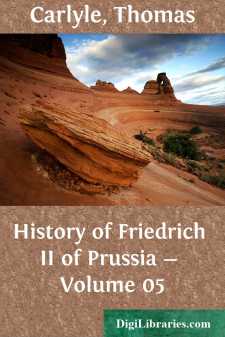 Chapter I. — DOUBLE-MARRIAGE IS DECIDED ON.

We saw George I. at Berlin in October, 1723, looking out upon his little Grandson drilling the Cadets there; but we did not mention what important errand had brought his Majesty thither.

Visits between Hanover and Berlin had been frequent for a long time back; the young Queen of Prussia, sometimes with her husband, sometimes without, running often over to see her Father; who, even after his accession to the English crown, was generally for some months every year to be met with in those favorite regions of his. He himself did not much visit, being of taciturn splenetic nature: but this once he had agreed to return a visit they had lately made him,—where a certain weighty Business had been agreed upon, withal; which his Britannic Majesty was to consummate formally, by treaty, when the meeting in Berlin took effect. His Britannic Majesty, accordingly, is come; the business in hand is no other than that thrice-famous "Double-Marriage" of Prussia with England; which once had such a sound in the ear of Rumor, and still bulks so big in the archives of the Eighteenth Century; which worked such woe to all parties concerned in it; and is, in fact, a first-rate nuisance in the History of that poor Century, as written hitherto. Nuisance demanding urgently to be abated;—were that well possible at present. Which, alas, it is not, to any great degree; there being an important young Friedrich inextricably wrapt up in it, to whom it was of such vital or almost fatal importance! Without a Friedrich, the affair could be reduced to something like its real size, and recorded in a few pages; or might even, with advantage, be forgotten altogether, and become zero. More gigantic instance of much ado about nothing has seldom occurred in human annals;—had not there been a Friedrich in the heart of it.

Crown-Prince Friedrich is still very young for marriage-speculations on his score: but Mamma has thought good to take matters in time. And so we shall, in the next ensuing parts of this poor History, have to hear almost as much about Marriage as in the foolishest Three-volume Novel, and almost to still less purpose. For indeed, in that particular, Friedrich's young Life may be called a ROMANCE FLUNG HELLS-OVER-HEAD; Marriage being the one event there, round which all events turn,—but turn in the inverse or reverse way (as if the Devil were in them); not only towards no happy goal for him or Mamma, or us, but at last towards hardly any goal at all for anybody! So mad did the affair grow;—and is so madly recorded in those inextricable, dateless, chaotic Books. We have now come to regions of Narrative, which seem to consist of murky Nothingness put on boil; not land, or water, or air, or fire, but a tumultuously whirling commixture of all the four;—of immense extent too. Which must be got crossed, in some human manner. Courage, patience, good reader!

QUEEN SOPHIE DOROTHEE HAS TAKEN TIME BY THE FORELOCK.

Already, for a dozen years, this matter has been treated of....