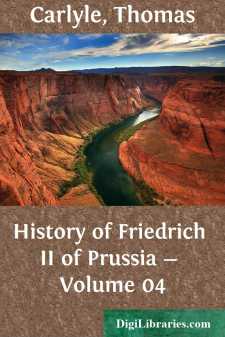 Of Friedrich's childhood, there is not, after all our reading, much that it would interest the English public to hear tell of. Perhaps not much of knowable that deserves anywhere to be known. Books on it, expressly handling it, and Books on Friedrich Wilhelm's Court and History, of which it is always a main element, are not wanting: but they are mainly of the sad sort which, with pain and difficulty, teach us nothing, Books done by pedants and tenebrific persons, under the name of men; dwelling not on things, but, at endless length, on the outer husks of things: of unparalleled confusion, too;—not so much as an Index granted you; to the poor half-peck of cinders, hidden in these wagon-loads of ashes, no sieve allowed! Books tending really to fill the mind with mere dust-whirlwinds,—if the mind did not straightway blow them out again; which it does. Of these let us say nothing. Seldom had so curious a Phenomenon worse treatment from the Dryasdust, species.

Among these Books, touching on Friedrich's childhood, and treating of his Father's Court, there is hardly above one that we can characterize as fairly human: the Book written by his little Sister Wilhelmina, when she grew to size and knowledge of good and evil; [Memoires de Frederique Sophie Wilhelmine de Prusse, Margrave de Bareith (Brunswick, Paris et Londres, l8l2), 2 vols. 8vo.]—and this, of what flighty uncertain nature it is, the world partly knows. A human Book, however, not a pedant one: there is a most shrill female soul busy with intense earnestness here; looking, and teaching us to look. We find it a VERACIOUS Book, done with heart, and from eyesight and insight; of a veracity deeper than the superficial sort. It is full of mistakes, indeed; and exaggerates dreadfully, in its shrill female way; but is above intending to deceive: deduct the due subtrahend,—say perhaps twenty-five per cent, or in extreme cases as high as seventy-five,—you will get some human image of credible actualities from Wilhelmina. Practically she is our one resource on this matter. Of the strange King Friedrich Wilhelm and his strange Court, with such an Heir-Apparent growing up in it, there is no real light to be had, except what Wilhelmina gives,—or kindles dark Books of others into giving. For that, too, on long study, is the result of her, here and there. With so flickery a wax-taper held over Friedrich's childhood,—and the other dirty tallow-dips all going out in intolerable odor,—judge if our success can be very triumphant!

We perceive the little creature has got much from Nature; not the big arena only, but fine inward gifts, for he is well-born in more senses than one;—and that in the breeding of him there are two elements noticeable, widely diverse: the French and the German. This is perhaps the chief peculiarity; best worth laying hold of, with the due comprehension, if our means allow.

FIRST EDUCATIONAL ELEMENT, THE FRENCH ONE.

His nurses, governesses, simultaneous and successive, mostly of French breed, are duly set down in the Prussian Books, and held in mind as a point of duty by Prussian men; but, in foreign parts, cannot be considered otherwise than as a group, and merely with generic features....