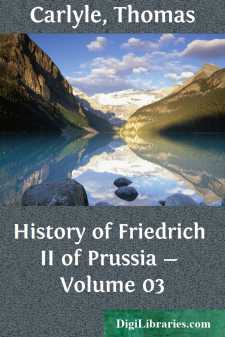 Chapter I. — KURFURST FRIEDRICH I.

Burggraf Friedrich, on his first coming to Brandenburg, found but a cool reception as Statthalter. ["Johannistage" (24 June) "1412," he first set foot in Brandenburg, with due escort, in due state; only Statthalter (Viceregent) as yet: Pauli, i. 594, ii. 58; Stenzel, Geschichte des Preussischen Staats (Hamburg, 1830, 1851), i. 167-169.] He came as the representative of law and rule; and there had been many helping themselves by a ruleless life, of late. Industry was at a low ebb, violence was rife; plunder, disorder everywhere; too much the habit for baronial gentlemen to "live by the saddle," as they termed it, that is by highway robbery in modern phrase.

The Towns, harried and plundered to skin and bone, were glad to see a Statthalter, and did homage to him with all their heart. But the Baronage or Squirearchy of the country were of another mind. These, in the late anarchies, had set up for a kind of kings in their own right: they had their feuds; made war, made peace, levied tolls, transit-dues; lived much at their own discretion in these solitary countries;—rushing out from their stone towers ("walls fourteen feet thick"), to seize any herd of "six hundred swine," any convoy of Lubeck or Hamburg merchant-goods, that had not contented them in passing. What were pedlers and mechanic fellows made for, if not to be plundered when needful? Arbitrary rule, on the part of these Noble Robber-Lords! And then much of the Crown-Domains had gone to the chief of them,—pawned (and the pawn-ticket lost, so to speak), or sold for what trifle of ready money was to be had, in Jobst and Company's time. To these gentlemen, a Statthalter coming to inquire into matters was no welcome phenomenon. Your EDLE HERR (Noble Lord) of Putlitz, Noble Lords of Quitzow, Rochow, Maltitz and others, supreme in their grassy solitudes this long while, and accustomed to nothing greater than themselves in Brandenburg, how should they obey a Statthalter?

Such was more or less the universal humor in the Squirearchy of Brandenburg; not of good omen to Burggraf Friedrich. But the chief seat of contumacy seemed to be among the Quitzows, Putlitzes, above spoken of; big Squires in the district they call the Priegnitz, in the Country of the sluggish Havel River, northwest from Berlin a fifty or forty miles. These refused homage, very many of them; said they were "incorporated with Bohmen;" said this and that;—much disinclined to homage; and would not do it. Stiff surly fellows, much deficient in discernment of what is above them and what is not:—a thick-skinned set; bodies clad in buff leather; minds also cased in ill habits of long continuance.

Friedrich was very patient with them; hoped to prevail by gentle methods. He "invited them to dinner;" "had them often at dinner for a year or more:" but could make no progress in that way. "Who is this we have got for a Governor?" said the noble lords privately to each other: "A NURNBERGER TAND (Nurnberg Plaything,—wooden image, such as they make at Nurnberg)," said they, grinning, in a thick-skinned way: "If it rained Burggraves all the year round, none of them would come to luck in this Country;"—and continued their feuds, toll-levyings, plunderings and other contumacies....