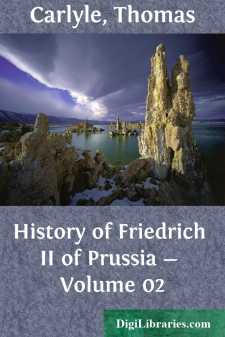 Chapter I. — BRANNIBOR: HENRY THE FOWLER.

The Brandenburg Countries, till they become related to the Hohenzollern Family which now rules there, have no History that has proved memorable to mankind. There has indeed been a good deal written under that title; but there is by no means much known, and of that again there is alarmingly little that is worth knowing or remembering.

Pytheas, the Marseilles Travelling Commissioner, looking out for new channels of trade, somewhat above 2,000 years ago, saw the country actually lying there; sailed past it, occasionally landing; and made report to such Marseillese "Chamber of Commerce" as there then was:—report now lost, all to a few indistinct and insignificant fractions. [Memoires de l'Academie des Inscriptions, t. xix. 46, xxxvii. 439, &c.] This was "about the year 327 before Christ," while Alexander of Macedon was busy conquering India. Beyond question, Pytheas, the first WRITING or civilized creature that ever saw Germany, gazed with his Greek eyes, and occasionally landed, striving to speak and inquire, upon those old Baltic Coasts, north border of the now Prussian Kingdom; and reported of it to mankind we know not what. Which brings home to us the fact that it existed, but almost nothing more: A Country of lakes and woods, of marshy jungles, sandy wildernesses; inhabited by bears, otters, bisons, wolves, wild swine, and certain shaggy Germans of the Suevic type, as good as inarticulate to Pytheas. After which all direct notice of it ceases for above three hundred years. We can hope only that the jungles were getting cleared a little, and the wild creatures hunted down; that the Germans were increasing in number, and becoming a thought less shaggy. These latter, tall Suevi Semnones, men of blond stern aspect (oculi truces coerulei) and great strength of bone, were known to possess a formidable talent for fighting: [Tacitus, De Moribus Germanorum, c. 45.] Drusus Germanicus, it has been guessed, did not like to appear personally among them: some "gigantic woman prophesying to him across the Elbe" that it might be dangerous, Drusus contented himself with erecting some triumphal pillar on his own safe side of the Elbe, to say that they were conquered.

In the Fourth Century of our era, when the German populations, on impulse of certain "Huns expelled from the Chinese frontier," or for other reasons valid to themselves, began flowing universally southward, to take possession of the rich Roman world, and so continued flowing for two centuries more; the old German frontiers generally, and especially those Northern Baltic countries, were left comparatively vacant; so that new immigrating populations from the East, all of Sclavic origin, easily obtained footing and supremacy there. In the Northern parts, these immigrating Sclaves were of the kind called Vandals, or Wends: they spread themselves as far west as Hamburg and the Ocean, south also far over the Elbe in some quarters; while other kinds of Sclaves were equally busy elsewhere. With what difficulty in settling the new boundaries, and what inexhaustible funds of quarrel thereon, is still visible to every one, though no Historian was there to say the least word of it....