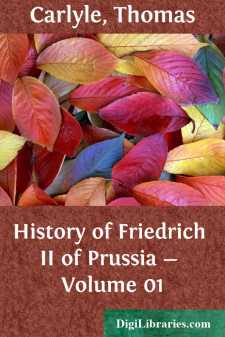 Chapter I. — PROEM: FRIEDRICH'S HISTORY FROM THE DISTANCE WE ARE AT.

About fourscore years ago, there used to be seen sauntering on the terraces of Sans Souci, for a short time in the afternoon, or you might have met him elsewhere at an earlier hour, riding or driving in a rapid business manner on the open roads or through the scraggy woods and avenues of that intricate amphibious Potsdam region, a highly interesting lean little old man, of alert though slightly stooping figure; whose name among strangers was King FRIEDRICH THE SECOND, or Frederick the Great of Prussia, and at home among the common people, who much loved and esteemed him, was VATER FRITZ,—Father Fred,—a name of familiarity which had not bred contempt in that instance. He is a King every inch of him, though without the trappings of a King. Presents himself in a Spartan simplicity of vesture: no crown but an old military cocked-hat,—generally old, or trampled and kneaded into absolute SOFTNESS, if new;—no sceptre but one like Agamemnon's, a walking-stick cut from the woods, which serves also as a riding-stick (with which he hits the horse "between the ears," say authors);—and for royal robes, a mere soldier's blue coat with red facings, coat likely to be old, and sure to have a good deal of Spanish snuff on the breast of it; rest of the apparel dim, unobtrusive in color or out, ending in high over-knee military boots, which may be brushed (and, I hope, kept soft with an underhand suspicion of oil), but are not permitted to be blackened or varnished; Day and Martin with their soot-pots forbidden to approach.

The man is not of godlike physiognomy, any more than of imposing stature or costume: close-shut mouth with thin lips, prominent jaws and nose, receding brow, by no means of Olympian height; head, however, is of long form, and has superlative gray eyes in it. Not what is called a beautiful man; nor yet, by all appearance, what is called a happy. On the contrary, the face bears evidence of many sorrows, as they are termed, of much hard labor done in this world; and seems to anticipate nothing but more still coming. Quiet stoicism, capable enough of what joy there were, but not expecting any worth mention; great unconscious and some conscious pride, well tempered with a cheery mockery of humor,—are written on that old face; which carries its chin well forward, in spite of the slight stoop about the neck; snuffy nose rather flung into the air, under its old cocked-hat,—like an old snuffy lion on the watch; and such a pair of eyes as no man or lion or lynx of that Century bore elsewhere, according to all the testimony we have. "Those eyes," says Mirabeau, "which, at the bidding of his great soul, fascinated you with seduction or with terror (portaient, au gre de son ame heroique, la seduction ou la terreur)." [Mirabeau, Histoire Secrete de la Cour de Berlin, Lettre 28?? (24 September, 1786) p. 128 (in edition of Paris, 1821)]. Most excellent potent brilliant eyes, swift-darting as the stars, steadfast as the sun; gray, we said, of the azure-gray color; large enough, not of glaring size; the habitual expression of them vigilance and penetrating sense, rapidity resting on depth....