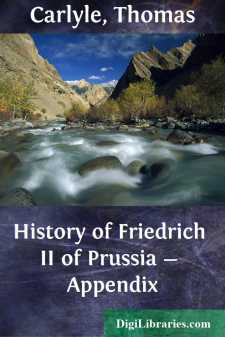 "OBERAMTMANN (Head-Manager) Fromme" was a sister's son of Poet, Gleim,—Gleim Canon of Halberstadt, who wrote Prussian "grenadier-songs" in, or in reference to, the Seven-Years War, songs still printed, but worth little; who begged once, after Friedrich's death, an OLD HAT of his, and took it with him to Halberstadt (where I hope it still is); who had a "Temple-of-Honor," or little Garden-house so named, with Portraits of his Friends hung in it; who put Jean Paul VERY SOON there, with a great explosion of praises; and who, in short, seems to have been a very good effervescent creature, at last rather wealthy too, and able to effervesce with some comfort;—Oberamtmann Fromme, I say, was this Gleim's Nephew; and stood as a kind of Royal Land-Bailiff under Frederick the Great, in a tract of country called the RHYN-LUCH (a dreadfully moory country of sands and quagmires, all green and fertile now, some twenty or thirty miles northwest of Berlin); busy there in 1779, and had been for some years past. He had originally been an Officer of the Artillery; but obtained his discharge in 1769, and got, before long, into this employment. A man of excellent disposition and temper; with a solid and heavy stroke of work in him, whatever he might be set to; and who in this OBERAMTMANNSHIP "became highly esteemed." He died in 1798; and has left sons (now perhaps grandsons or great-grandsons), who continue estimable in like situations under the Prussian Government.

One of Fromme's useful gifts, the usefulest of all for us at present, was "his wonderful talent of exact memory." He could remember to a singular extent; and, we will hope, on this occasion, was unusually conscientious to do it. For it so happened, in July, 1779 (23d July), Friedrich, just home from his troublesome Bavarian War, [Had arrived at Berlin May 27th (Rodenbeck, iii. 201).] and again looking into everything with his own eyes, determined to have a personal view of those Moor Regions of Fromme's; to take a day's driving through that RHYN-LUCH which had cost him so much effort and outlay; and he ordered Fromme to attend him in the expedition. Which took effect accordingly; Fromme riding swiftly at the left wheel of Friedrich's carriage, and loudly answering questions of his, all day.—Directly on getting home, Fromme consulted his excellent memory, and wrote down everything; a considerable Paper,—of which you shall now have an exact Translation, if it be worth anything. Fromme gave the Paper to Uncle Gleim; who, in his enthusiasm, showed it extensively about, and so soon as there was liberty, had it "printed, at his own expense, for the benefit of poor soldiers' children." ["Gleim's edition, brought out in 1786, the year of Friedrich's death, is now quite gone,—the Book undiscoverable. But the Paper was reprinted in an ANEKDOTEN-SAMMLUNG (Collection of Anecdotes, Berlin, 1787, 8tes STUCK, where I discover it yesterday (17th July, 1852) in a copy of mine, much to my surprise; having before met with it in one Hildebrandt's ANEKDOTEN-SAMMLUNG (Halberstadt, 1830, 4tes STUCK, a rather slovenly Book), where it is given out as one of the rarest of all rarities, and as having been specially 'furnished by a Dr....