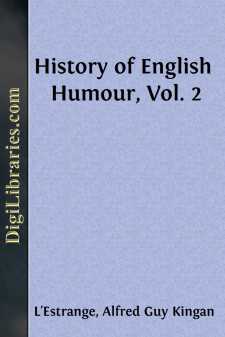 Burlesque, that is comic imitation, comprises parody and caricature. The latter is a valuable addition to humorous narrative, as we see in the sketches of Gillray, Cruikshank and others. By itself it is not sufficiently suggestive and affords no story or conversation. Hence in the old caricatures the speeches of the characters were written in balloons over their heads, and in the modern an explanation is added underneath. For want of such assistance we lose the greater part of the humour in Hogarth's paintings.

We may date the revival of Parody from the fifteenth century, although Dr. Johnson speaks as though it originated with Philips. Notwithstanding the great scope it affords for humorous invention, it has never become popular, nor formed an important branch of literature; perhaps, because the talent of the parodist always suffered from juxtaposition with that of his original. In its widest sense parody is little more than imitation, but as we should not recognise any resemblance without the use of the same form, it always implies a similarity in words or style. Sometimes the thoughts are also reproduced, but this is not sufficient, and might merely constitute a summary or translation. The closer the copy the better the parody, as where Pope's lines

"Here shall the spring its earliest sweets bestowHere the first roses of the year shall blow,"

"Here shall the spring its earliest coughs bestow,Here the first noses of the year shall blow."

But all parody is not travesty, for a writing may be parodied without being ridiculed. This was notably the case in the Centones, Scripture histories in the phraseology of Homer and Virgil, which were written by the Christians in the fourth century, in order that they might be able to teach at once classics and religion. From the pious object for which they were first designed, they degenerated into fashionable exercises of ingenuity, and thus we find the Emperor Valentinian composing some on marriage, and requesting, or rather commanding Ausonius to contend with him in such compositions. They were regarded as works of fancy—a sort of literary embroidery.

It may be questioned whether any of these parodies were intended to possess humour; but wherever we find such as have any traces of it, we may conclude that the imitation has been adopted to increase it. This does not necessarily amount to travesty, for the object is not always to throw contempt on the original. Thus, we cannot suppose "The Battle of the Frogs and Mice," or "The Banquet of Matron," although written in imitation of the heroic poetry of Homer, was intended to make "The Iliad" appear ridiculous, but rather that the authors thought to make their conceits more amusing, by comparing what was most insignificant with something of unsurpassable grandeur....