History of England from the Fall of Wolsey to the Death of Elizabeth. Vol. II. 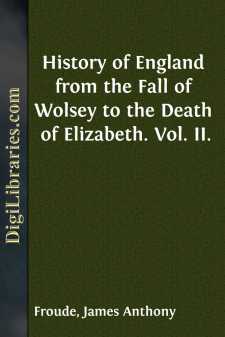 Where changes are about to take place of great and enduring moment, a kind of prologue, on a small scale, sometimes anticipates the true opening of the drama; like the first drops which give notice of the coming storm, or as if the shadows of the reality were projected forwards into the future, and imitated in dumb show the movements of the real actors in the story.

Prelude to the Reformation in the fourteenth century.

Such a rehearsal of the English Reformation was witnessed at the close of the fourteenth century, confused, imperfect, disproportioned, to outward appearance barren of results; yet containing a representative of each one of the mixed forces by which that great change was ultimately effected, and foreshadowing even something of the course which it was to run.

There was a quarrel with the pope upon the extent of the papal privileges; there were disputes between the laity and the clergy,—accompanied, as if involuntarily, by attacks on the sacramental system and the Catholic faith,—while innovation in doctrine was accompanied also with the tendency which characterized the extreme development of the later Protestants—towards political republicanism, the fifth monarchy, and community of goods. Some account of this movement must be given in this place, although it can be but a sketch only. "Lollardry" has a historyThe Lollards forerunners, not fathers, of the Reformation. of its own; but it forms no proper part of the history of the Reformation. It was a separate phenomenon, provoked by the same causes which produced their true fruit at a later period; but it formed no portion of the stem on which those fruits ultimately grew. It was a prelude which was played out, and sank into silence, answering for the time no other end than to make the name of heretic odious in the ears of the English nation. In their recoil from their first failure, the people stamped their hatred of heterodoxy into their language; and in the word miscreant, misbeliever, as the synonym of the worst species of reprobate, they left an indelible record of the popular estimate of the followers of John Wycliffe.

The Lollard story opens with the disputes between the crown and the see of Rome on the presentation to English benefices. For the hundred and fifty years which succeeded the Conquest, the right of nominating the archbishops, the bishops, and the mitred abbots, had been claimed and exercised by the crown.Changes in the mode of presentation to bishopricks. On the passing of the great charter, the church had recovered its liberties, and the privilege of free election had been conceded by a special clause to the clergy. The practice which then became established was in accordance with the general spirit of the English constitution. On the vacancy of a see, the cathedral chapter applied to the crown for a congé d'élire. The application was a form; the consent was invariable. A bishop was then elected by a majority of suffrages; his name was submitted to the metropolitan, and by him to the pope....