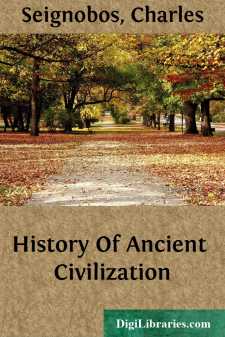 Add to My Favorites
Published: 9 years ago
Downloads: 296
Rating: (0 Votes)

CHAPTER I THE ORIGINS OF CIVILIZATION PREHISTORIC ARCHÆOLOGY

Prehistoric Remains.—One often finds buried in the earth, weapons, implements, human skeletons, débris of every kind left by men of whom we have no direct knowledge. These are dug up by the thousand in all the provinces of France, in Switzerland, in England, in all Europe; they are found even in Asia and Africa. It is probable that they exist in all parts of the world.

These remains are called prehistoric because they are more ancient than written history. For about fifty years men have been engaged in recovering and studying them. Today most museums have a hall, or at least, some cases filled with these relics. A museum at Saint-German-en-Laye, near Paris, is entirely given up to prehistoric remains. In Denmark is a collection of more than 30,000 objects. Every day adds to the discoveries as excavations are made, houses built, and cuts made for railroads.

These objects are not found on the surface of the ground, but ordinarily buried deeply where the earth has not been disturbed. They are recovered from a stratum of gravel or clay which has been deposited gradually and has fixed them in place safe from the air, a sure proof that they have been there for a long time.

Prehistoric Science.—Scholars have examined the débris and have asked themselves what men have left them. From their skeletons, they have tried to construct their physical appearance; from their tools, the kind of life they led. They have determined that these instruments resemble those used by certain savages today. The study of all these objects constitutes a new science, Prehistoric Archæology.

The Four Ages.—Prehistoric remains come down to us from very diverse races of men; they have been deposited in the soil at widely different epochs since the time when the mammoth lived in western Europe, a sort of gigantic elephant with woolly hide and curved tusks. This long lapse of time may be divided into four periods, called Ages:

The periods take their names from the materials used in the manufacture of the tools,—stone, bronze, iron. These epochs, however, are of very unequal length. It may be that the Rough Stone Age was ten times as long as the Age of Iron.

Gravel Débris.—The oldest remains of the Stone Age have been found in the gravels. A French scholar found between 1841 and 1853, in the valley of the Somme, certain sharp instruments made of flint. They were buried to a depth of six metres in gravel under three layers of clay, gravel, and marl which had never been broken up. In the same place they discovered bones of cattle, deer, and elephants. For a long time people made light of this discovery. They said that the chipping of the flints was due to chance. At last, in 1860, several scholars came to study the remains in the valley of the Somme and recognized that the flints had certainly been cut by men....