History, Manners, and Customs of the North American Indians 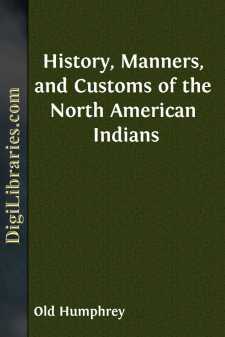 It was on a wild and gusty day, that Austin and Brian Edwards were returning home from a visit to their uncle, who lived at a distance of four or five miles from their father’s dwelling, when the wind, which was already high, rose suddenly; and the heavens, which had for some hours been overclouded, grew darker, with every appearance of an approaching storm. Brian was for returning back; but to this Austin would by no means consent. Austin was twelve years of age, and Brian about two years younger. Their brother Basil, who was not with them, had hardly completed his sixth year.

The three brothers, though unlike in some things—for Austin was daring, Brian fearful, and Basil affectionate—very closely resembled each other in their love of books and wonderful relations. What one read, the other would read; and what one had learned, the other wished to know.

Louder and louder blew the wind, and darker grew the sky, and already had a distant flash and growling thunder announced the coming storm, when the two brothers arrived at the rocky eminence where, though the wood was above them, the river rolled nearly a hundred fathoms below. Some years before, a slip of ground had taken place at no great distance from the spot, when a mass of earth, amounting to well nigh half an acre, with the oak trees that grew upon it, slid down, all at once, towards the river. The rugged rent occasioned by the slip of earth, the great height of the road above the river, the rude rocks that here and there presented themselves, and the giant oaks of the wood frowning on the dangerous path, gave it a character at once highly picturesque and fearful. Austin, notwithstanding the loud blustering of the wind, and the remonstrance of his brother to hasten on, made a momentary pause to enjoy the scene.

In a short time the two boys had approached the spot where a low, jutting rock of red sand-stone, around which the roots of a large tree were seen clinging, narrowed the path; so that there was only the space of a few feet between the base of the rock and an abrupt and fearful precipice.

Austin was looking down on the river, and Brian was holding his cap to prevent it being blown from his head, when, between the fitful blasts, a loud voice, or rather a cry, was heard. “Stop, boys, stop! come not a foot farther on peril of your lives!” Austin and Brian stood still, neither of them knowing whence came the cry, nor what was the danger that threatened them; they were, however, soon sensible of the latter, for the rushing winds swept through the wood with a louder roar, and, all at once, part of the red sand-stone rock gave way with the giant oak whose roots were wrapped round it, when the massy ruin, with a fearful crash, fell headlong across the path, and right over the precipice. Brian trembled with affright, and Austin turned pale. In another minute an active man, somewhat in years, was seen making his way over such parts of the fallen rock as had lodged on the precipice. It was he who had given the two brothers such timely notice of their danger, and thereby saved their lives....