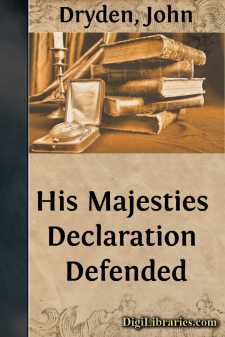 Wherever English literature is studied, John Dryden is recognized as the author of some of the greatest political satires in the language. Until recently the fact has been overlooked that before he wrote the first of these satires, Absalom and Achitophel, he had entered the political arena with the prose tract here reproduced. The proof that the Historiographer Royal contributed to the anti-Whig propaganda of the spring of 1681 depends partly on contemporary or near-contemporary statements but principally on internal evidence. An article by Professor Roswell G. Ham (The Review of English Studies, XI (1935), 284-98; Hugh Macdonald, John Dryden, A Bibliography, p. 167) demonstrated Dryden's authorship so satisfactorily that it is unnecessary to set forth here the arguments that established this thesis. The time when Dryden was composing his defence of the royal Declaration is approximately fixed from the reference to it on June 22, 1681, in The Observator, which had noted the Whig pamphlet Dryden was answering under the date of May 26.

The bitter controversy into which Dryden thrust himself was the culmination of eleven years' political strife. In 1670, by the secret Treaty of Dover, Charles II and Louis XIV agreed that the English king should declare himself a Roman Catholic, and receive from his brother of France the equivalent of 80,000 pounds sterling and, in case of a Protestant rebellion, 6000 French soldiers. In addition, the two kings were pledged to undertake a war for the partition of the United Provinces. In the words of the late Lord Acton this treaty is "the solid substance of the phantom which is called the Popish Plot." (Lectures on Modern History (1930), p. 211) The attempt to carry out the second part of the treaty was made in 1672, when England and France attacked the United Provinces which made a successful defence, aided by a coalition including the Emperor, Elector of Brandenburg, and King of Spain. The unpopularity of the war compelled Charles II to make peace in 1674. Meanwhile the King had taken a step to put into operation the first part of the Treaty of Dover by issuing a Declaration of Indulgence relieving Catholics and Dissenters alike from the penal laws. He was forced, however, to withdraw it and to give his assent to the Test Act which excluded from all public offices those unwilling to take the sacraments according to the rites of the Church of England. Henceforth Charles II abandoned all hope of restoring Catholicism, though his brother and heir, James, Duke of York, already a convert, remained resolute to secure at least toleration for his co-religionists. But many Englishmen continued to suspect the royal policy.

Roman Catholicism was feared and hated by many Englishmen for two distinct reasons. The first was based on bigotry, nourished by memories of the Marian persecution, the papal bull dethroning Elizabeth, Guy Fawkes' Plot, and by apprehensions that a Catholic could not be a loyal subject so long as he recognized the temporal power of the Pope....