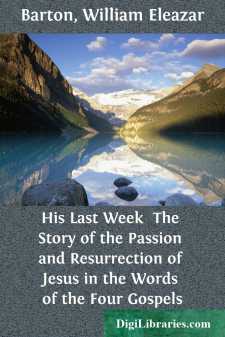 GOING UP TO JERUSALEM.

And it came to pass when the days were well nigh come that Jesus should be received up, he stedfastly set his face to go to Jerusalem. And he departed from Galilee, and passed through the borders of Samaria and Galilee, and came into the borders of Judæa beyond the Jordan. And great multitudes followed him, and he healed them there.

And they were on the way, going up to Jerusalem; and Jesus was going before them: and they were amazed; and they that followed were afraid.

Thomas therefore, who is called Didymus, said unto his fellow-disciples, "Let us also go, that we may die with him."

And he entered and passed through Jericho and went on before, going up to Jerusalem.

Now the passover of the Jews was at hand: and many went up to Jerusalem out of the country before the passover, to purify themselves. They sought therefore for Jesus, and spake one with another, as they stood in the temple, "What think ye? That he will not come to the feast?"

Now the chief priests and the Pharisees had given commandment, that, if any man knew where he was, he should show it, that they might take him.

The Feast at Bethany.

Jesus therefore six days before the passover came to Bethany, where Lazarus was, whom Jesus raised from the dead. So they made him a supper there in the house of Simon the leper; and Martha served: but Lazarus was one of them that sat at meat with him. Mary therefore took a pound of ointment of pure nard, very precious, and anointed the feet of Jesus, and wiped his feet with her hair; and the house was filled with the odor of the ointment.

But Judas Iscariot, one of his disciples, that should betray him, saith, "Why was not this ointment sold for three hundred shillings, and given to the poor?"

Now this he said, not because he cared for the poor; but because he was a thief, and having the bag took away what was put therein.

Jesus therefore said, "Suffer her to keep it against the day of my burying. For the poor ye have always with you; but me ye have not always. She hath done what she could; she hath anointed my body beforehand for the burying. And verily I say unto you, Wheresoever the gospel shall be preached throughout the whole world, that also which this woman hath done shall be spoken of for a memorial of her."

The common people therefore of the Jews learned that he was there: and they came, not for Jesus' sake only, but that they might see Lazarus also, whom he had raised from the dead. But the chief priests took counsel that they might put Lazarus also to death; because that by reason of him many of the Jews went away, and believed on Jesus.