Hints on Horsemanship, to a Nephew and Niece or, Common Sense and Common Errors in Common Riding 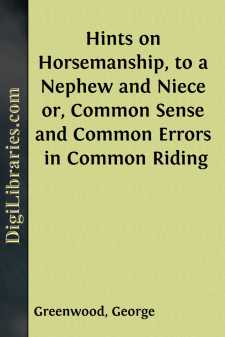 Throughout Europe there is only one style of riding taught; that is, the soldier’s one-handed style.—Two hands should be used to the reins.—A soldier’s horse must turn on the wrong rein.—Common riders generally turn their horses on the wrong rein. Result of this with colts or restive horses.—Indications are not aids.

England is the only European country which admits of more than one style of riding. Only one style of riding taught. But in all Europe, even in England, there is but one style of riding taught, as a system; that style is the manége or military style. That is, a one-handed style. The military style is, and must ever be essentially a one-handed style, for the soldier must have his right hand at liberty for his weapons. The recruit is indeed made to ride with a single snaffle in two hands, but only as a preparatory step to the one-handed style. His left hand then becomes his bridle hand, and that hand must hold the reins in such a manner as will require the least possible aid from the sword hand to shorten them as occasion may require. This is with the fourth finger only between them ().

For these reasons, as far as soldiers are concerned, I do not see how the present system can be altered for the better, unless it be by placing the three last fingers of the left hand between the reins (), instead of the fourth finger only. The reins held in this way are as easily and as quickly shortened, by drawing them with the right hand through the left, as if they were separated by the fourth finger only. I always adopted this mode myself when my sword was in my hand; and I should think it worth trial for all soldiers. My two last chargers had been notoriously restive horses, and I could not have ridden them in the strictly regimental mode.

Two hands should be used to the reins. But I see no reason why, because soldiers are compelled to guide their horses with the left hand only, and with the fourth finger only between the reins, that ladies and civilians should be condemned to the same system. On the contrary, I would have ladies as well as gentlemen use both hands to the reins, whether of the curb or of the snaffle, somewhat as the rough-rider or colt-breaker uses the reins of a single snaffle; but the reins should enter the hands outside instead of inside the fourth fingers, and they should quit the hands between the first and second fingers instead of between the first finger and thumb, as will be explained in the next chapter.

Fasten the end of a rein to the upper part of the back of a chair; pull the reins enough to raise two of the legs off the ground, and to keep the chair balanced on the other two. Take your reins as ladies and soldiers are taught to take them (), both grasped in the left hand, the fourth finger only between them, and (I quote from the regulations of the English cavalry) “the top of the thumb firmly closed on them—the upper part of the arm hanging straight down from the shoulder—the left elbow lightly touching the hip—the lower part of the arm square to the upper—little finger on a level with the elbow—wrist rounded outwards—the back of the hand to the front—the thumb pointing across the body, and three inches from it.” In this position we are taught that “the little finger of the bridle-hand has four lines of action—first, towards the breast (to stop or rein back); second, towards the right shoulder (to turn to the right); third, towards the left shoulder (to turn to the left); fourth, towards the horse’s head (to advance).” Try the second motion: you will find it a very nice operation, and that you are capable of shortening the right rein only in a very slight degree; you will also find that, if the hand ceases to be precisely opposite the centre of the body, the moment it is passed to the right the right rein becomes slackened, and the left rein is pulled....