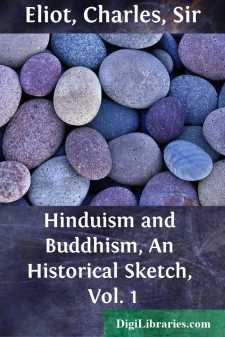 Probably the first thought which will occur to the reader who is acquainted with the matters treated in this work will be that the subject is too large. A history of Hinduism or Buddhism or even of both within the frontiers of India may be a profitable though arduous task, but to attempt a historical sketch of the two faiths in their whole duration and extension over Eastern Asia is to choose a scene unsuited to any canvas which can be prepared at the present day. Not only is the breadth of the landscape enormous but in some places it is crowded with details which cannot be omitted while in others the principal features are hidden by a mist which obscures the unity and connection of the whole composition. No one can feel these difficulties more than I do myself or approach his work with more diffidence, yet I venture to think that wide surveys may sometimes be useful and are needed in the present state of oriental studies. For the reality of Indian influence in Asia—from Japan to the frontiers of Persia, from Manchuria to Java, from Burma to Mongolia—is undoubted and the influence is one. You cannot separate Hinduism from Buddhism, for without it Hinduism could not have assumed its medieval shape and some forms of Buddhism, such as Lamaism, countenance Brahmanic deities and ceremonies, while in Java and Camboja the two religions were avowedly combined and declared to be the same. Neither is it convenient to separate the fortunes of Buddhism and Hinduism outside India from their history within it, for although the importance of Buddhism depends largely on its foreign conquests, the forms which it assumed in its new territories can be understood only by reference to the religious condition of India at the periods when successive missions were despatched. This book then is an attempt to give a sketch of Indian thought or Indian religion—for the two terms are nearly equivalent in extent—and of its history and influence in Asia. I will not say in the world, for that sounds too ambitious and really adds little to the more restricted phrase. For ideas, like empires and races, have their natural frontiers. Thus Europe may be said to be non-Mohammedan. Although the essential principles of Mohammedanism seem in harmony with European monotheism, yet it has been deliberately rejected by the continent and often repelled by force. Similarly in the regions west of India, Indian religion is sporadic and exotic. I do not think that it had much influence on ancient Egypt, Babylon and Palestine or that it should be counted among the forces which shaped the character and teaching of Christ, though Christian monasticism and mysticism perhaps owed something to it. The debt of Manichaeism and various Gnostic sects is more certain and more considerable, but these communities have not endured and were regarded as heretical while they lasted. Among the Neoplatonists of Alexandria and the Sufis of Arabia and Persia many seem to have listened to the voice of Hindu mysticism but rather as individuals than as leaders of popular movements....