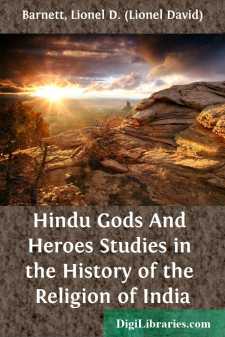 Let us imagine we are in a village of an Aryan tribe in the Eastern Panjab something more than thirty centuries ago. It is made up of a few large huts, round which cluster smaller ones, all of them rudely built, mostly of bamboo; in the other larger ones dwell the heads of families, while the smaller ones shelter their kinsfolk and followers, for this is a patriarchal world, and the housefather gives the law to his household. The people are mostly a comely folk, tall and clean-limbed, and rather fair of skin, with well-cut features and straight noses; but among them are not a few squat and ugly men and women, flat-nosed and nearly black in colour, who were once the free dwellers in this land, and now have become slaves or serfs to their Aryan conquerors. Around the village are fields where bullocks are dragging rough ploughs; and beyond these are woods and moors in which lurk wild men, and beyond these are the lands of other Aryan tribes. Life in the village is simple and rude, but not uneventful, for the village is part of a tribe, and tribes are constantly fighting with one another, as well as with the dark-skinned men who often try to drive back the Aryans, sometimes in small forays and sometimes in massed hordes. But the world in which the village is interested is a small one, and hardly extends beyond the bounds of the land where its tribe dwells. It knows something of the land of the Five Rivers, in one corner of which it lives, and something even of the lands to the north of it, and to the west as far as the mountains and deserts, where live men of its own kind and tongue; but beyond these limits it has no knowledge. Only a few bold spirits have travelled eastward across the high slope that divides the land of the Five Rivers from the strange and mysterious countries around the great rivers Gaá¹…gÄ and YamunÄ, the unknown land of deep forests and swarming dark-skinned men.

In the matter of religion these Aryans care a good deal about charms and spells, black and white magic, for preventing or curing all kinds of diseases or mishaps, for winning success in love and war and trade and husbandry, for bringing harm upon enemies or rivals—charms which a few centuries later will be dressed up in á¹šigvÄ“dic style, stuffed out with imitations of á¹šigvÄ“dic hymns, and published under the name of Atharva vÄ“da, "the lore of the Atharvans," by wizards who claim to belong to the old priestly clans of Atharvan and Aá¹…giras. But we have not yet come so far, and as yet all that these people can tell us is a great deal about their black and white magic, in which they are hugely interested, and a fair amount about certain valiant men of olden times who are now worshipped by them as helpful spirits, and a little about some vague spirits who are in the sun and the air and the fire and other places, and are very high and great, but are not interesting at all.

This popular religion seems to be a hopeless one, without ideals and symbols of love and hope. Is there nothing better to be found in this place?...