High Adventure A Narrative of Air Fighting in France 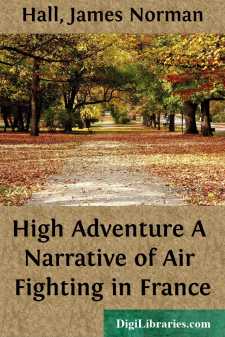 It was on a cool, starlit evening, early in September, 1916, that I first met Drew of Massachusetts, and actually began my adventures as a prospective member of the Escadrille Américaine. We had sailed from New York by the same boat, had made our applications for enlistment in the Foreign Legion on the same day, without being aware of each other's existence; and in Paris, while waiting for our papers, we had gone, every evening, for dinner, to the same large and gloomy-looking restaurant in the neighborhood of the Seine.

As for the restaurant, we frequented it, not assuredly because of the quality of the food. We might have dined better and more cheaply elsewhere. But there was an air of vanished splendor, of faded magnificence, about the place which, in the capital of a warring nation, appealed to both of us. Every evening the tables were laid with spotless linen and shining silver. The wineglasses caught the light from the tarnished chandeliers in little points of color. At the dinner-hour, a half-dozen ancient serving-men silently took their places about the room. There was not a sound to be heard except the occasional far-off honk of a motor or the subdued clatter of dishes from the kitchens. The serving-men, even the tables and the empty chairs, seemed to be listening, to be waiting for the guests who never came. Rarely were there more than a dozen diners-out during the course of an evening. There was something mysterious in these elaborate preparations, and something rather fine about them as well; but one thought, not without a touch of sadness, of the old days when there had been laughter and lights and music, sparkling wines and brilliant talk, and how those merrymakers had gone, many of them, long ago to the wars.

As it happened on this evening, Drew and I were sitting at adjoining tables. Our common citizenship was our introduction, and after five minutes of talk, we learned of our common purpose in coming to France. I suppose that we must have eaten after making this latter discovery. I vaguely remember seeing our old waiter hobbling down a long vista of empty tables on his way to and from the kitchens. But if we thought of our food at all, it must have been in a purely mechanical way.

Drew can talk—by Jove, how the man can talk!—and he has the faculty of throwing the glamour of romance over the most commonplace adventures. Indeed, the difficulty which I am going to have in writing this narrative is largely due to this romantic influence of his. I might have succeeded in writing a plain tale, for I have kept my diary faithfully, from day to day, and can set down our adventures, such as they are, pretty much as they occurred. But Drew has bewitched me. He does not realize it, but he is a weaver of spells, and I am so enmeshed in his moonshine that I doubt if I shall be able to write of our experiences as they must appear to those of our comrades in the Franco-American Corps who remember them only through the medium of the revealing light of day.

Not one of these men, I am sure, would confess to so strange an immediate cause for joining the aviation service, as that related to me by Drew, as we sat over our coffee and cigarettes, on the evening of our first meeting. He had come to France, he said, with the intention of joining the Légion Étrangère as an infantryman. But he changed his mind, a few days after his arrival in Paris, upon meeting Jackson of the American Aviation Squadron, who was on leave after a service of six months at the front. It was all because of the manner in which Jackson looked at a Turkish rug. He told him of his adventures in the most matter-of-fact way. No heroics, nothing of that sort. He had not a glimmer of imagination, he said. But he had a way of looking at the floor which was “irresistible,” which “fascinated him with the sense of height.” He saw towns, villages, networks of trenches, columns of toy troops moving up ribbons of road—all in the patterns of a Turkish rug....