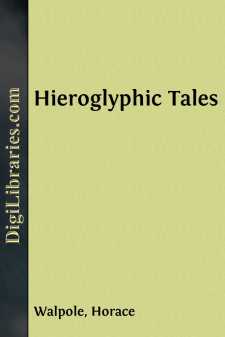 At the foot of the great mountain Hirgonqúu was anciently situated the kingdom of Larbidel. Geographers, who are not apt to make such just comparisons, said, it resembled a football just going to be kicked away; and so it happened; for the mountain kicked the kingdom into the ocean, and it has never been heard of since.

One day a young princess had climbed up to the top of the mountain to gather goat's eggs, the whites of which are excellent for taking off freckles.—Goat's eggs!—Yes—naturalists hold that all Beings are conceived in an egg. The goats of Hirgonqúu might be oviparous, and lay their eggs to be hatched by the sun. This is my supposition; no matter whether I believe it myself or not. I will write against and abuse any man that opposes my hypothesis. It would be fine indeed if learned men were obliged to believe what they assert.

The other side of the mountain was inhabited by a nation of whom the Larbidellians knew no more than the French nobility do of Great Britain, which they think is an island that some how or other may be approached by land. The princess had strayed into the confines of Cucurucu, when she suddenly found herself seized by the guards of the prince that reigned in that country. They told her in few words that she must be conveyed to the capital and married to the giant their lord and emperor. The giant, it seems, was fond of having a new wife every night, who was to tell him a story that would last till morning, and then have her head cut off—such odd ways have some folks of passing their wedding-nights! The princess modestly asked, why their master loved such long stories? The captain of the guard replied, his majesty did not sleep well—Well! said she, and if he does not!—not but I believe I can tell as long stories as any princess in Asia. Nay, I can repeat Leonidas by heart, and your emperor must be wakeful indeed if he can hold out against that.

By this time they were arrived at the palace. To the great surprise of the princess, the emperor, so far from being a giant, was but five feet one inch in height; but being two inches taller than any of his predecessors, the flattery of his courtiers had bestowed the name of giant on him; and he affected to look down upon any man above his own stature. The princess was immediately undressed and put to bed, his majesty being impatient to hear a new story.

Light of my eyes, said the emperor, what is your name? I call myself the princess Gronovia, replied she; but my real appellation is the frow Gronow. And what is the use of a name, said his majesty, but to be called by it? And why do you pretend to be a princess, if you are not? My turn is romantic, answered she, and I have ever had an ambition of being the heroine of a novel. Now there are but two conditions that entitle one to that rank; one must be a shepherdess or a princess. Well, content yourself, said the giant, you will die an empress, without being either the one or the other!...