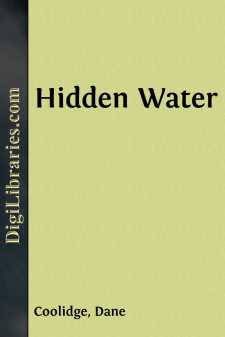 After many long, brooding days of sunshine, when the clean-cut mountains gleamed brilliantly against the sky and the grama grass curled slowly on its stem, the rain wind rose up suddenly out of PapaguerÃ­a and swooped down upon the desolate town of Bender, whirling a cloud of dust before it; and the inhabitants, man and horse, took to cover. New-born clouds, rushing out of the ruck of flying dirt, cast a cold, damp shadow upon the earth and hurried past; white-crested thunder-caps, piling-up above the Four Peaks, swept resolutely down to meet them; and the storm wind, laden with the smell of greasewood and wetted alkali, lashed the gaunt desert bushes mercilessly as it howled across the plain. Striking the town it jumped wickedly against the old Hotel Bender, where most of the male population had taken shelter, buffeting its false front until the glasses tinkled and the bar mirrors swayed dizzily from their moorings. Then with a sudden thunder on the tin roof the flood came down, and Black Tex set up the drinks.

It was a tall cowman just down from the Peaks who ordered the round, and so all-embracing was his good humor that he bid every one in the room drink with him, even a sheepman. Broad-faced and huge, with four months’ growth of hair and a thirst of the same duration, he stood at the end of the bar, smiling radiantly, one sun-blackened hand toying with the empty glass.

“Come up, fellers,” he said, waving the other in invitation, “and drink to Arizona. With a little more rain and good society she’d be a holy wonder, as the Texas land boomer says down in hell.” They came up willingly, cowpunchers and sheepmen, train hands, prospectors, and the saloon bums that Black Tex kept about to blow such ready spenders as he, whenever they came to town. With a practised jolt of the bottle Tex passed down the line, filling each heavy tumbler to the brim; he poured a thin one for himself and beckoned in his roustabout to swell the count––but still there was an empty glass. There was one man over in the corner who had declined to drink. He sat at a disused card table studiously thumbing over an old magazine, and as he raised his dram the barkeeper glowered at him intolerantly.

“Well,” said the big cowboy, reaching for his liquor, “here’s how––and may she rain for a week!” He shoved back his high black sombrero as he spoke, but before he signalled the toast his eye caught the sidelong glance of Black Tex, and he too noticed the little man in the corner.

“What’s the matter?” he inquired, leaning over toward Tex and jerking his thumb dubiously at the corner, and as the barkeeper scowled and shrugged his shoulders he set down his glass and stared.

The stranger was a small man, for Arizona, and his delicate hands were almost as white as a woman’s; but the lines in his face were graven deep, without effeminacy, and his slender neck was muscled like a wrestler’s. In dress he was not unlike the men about him––Texas boots, a broad sombrero, and a canvas coat to turn the rain,––but his manner was that of another world, a sombre, scholarly repose such as you would look for in the reference room of the Boston Public Library; and he crouched back in his corner like a shy, retiring mouse....