Hesperus and Other Poems and Lyrics 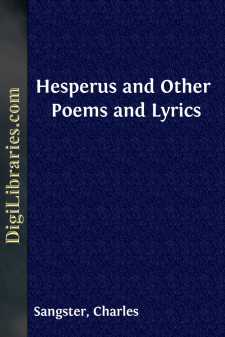 Dear Carrie, were we truly wise,  And could discern with finer eyes,    And half-inspired sense,    The ways of Providence:

Could we but know the hidden things  That brood beneath the Future's wings,    Hermetically sealed,    But soon to be revealed:

Would we, more blest than we are now,  In due submission learn to bow,—    Receiving on our knees    The Omnipotent decrees?

That which is just, we have. And we  Who lead this round of mystery,    This dance of strange unrest,    What are we at the best?—

Unless we learn to mount and climb;  Writing upon the page of time,    In words of joy or pain,    That we've not lived in vain.

We all are Ministers of Good;  And where our mission's understood,    How many hearts we must    Raise, trembling, from the dust.

Cherish thy Gift; and let it be  A Jacob's ladder unto thee,    Down which the Angels come,    To bring thee dreams of Home.

What were we if the pulse of Song  Had never beat, nor found a tongue    To make the Poet known    In lands beyond his own?

Take what is said for what is meant.  We sometimes touch the firmament    Of starry Thought—no more;    Beyond, we may not soar.

I speak not of myself, but stand  In silence till the Master Hand    Each fluttering thought sets free.    God holds the golden key.

HESPERUS: A LEGEND OF THE STARS. PRELUDE.

The Stars are heaven's ministers;    Right royally they teach  God's glory and omnipotence,    In wondrous lowly speech.  All eloquent with music as    The tremblings of a lyre,  To him that hath an ear to hear    They speak in words of fire.

Not to learned sagas only    Their whisperings come down;  The monarch is not glorified    Because he wears a crown.  The humblest soldier in the camp    Can win the smile of Mars,  And 'tis the lowliest spirits hold    Communion with the stars.

Thoughts too refined for utterance,    Ethereal as the air,  Crowd through the brain's dim labyrinths,    And leave their impress there;{12}

As far along the gleaming void    Man's tender glances roll,  Wonder usurps the throne of speech,    But vivifies the soul.

Oh, heaven-cradled mysteries,    What sacred paths ye've trod—  Bright, jewelled scintillations from    The chariot-wheels of God!  When in the spirit He rode forth,    With vast creative aim,  These were His footprints left behind,    To magnify His name!