Herself Talks with Women Concerning Themselves

by Edith B. (Edith Belle) Lowry 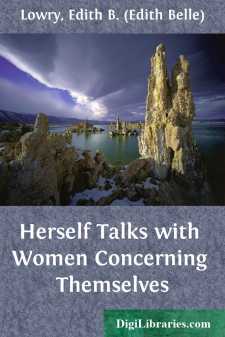 CHAPTER I ANATOMY AND PHYSIOLOGY OF THE FEMALE ORGANS

Before we can understand the care of anything we must have some knowledge of its structure; so I think it well, in this our first talk, that we should learn something of the structure of the female generative organs. As I have told some of you in former talks, the womb is designed as a nest for the babe during its process of development from the egg or ovule. It lies in the center of the pelvis, or lower part of the body cavity, in front of the rectum and behind and above the bladder. It is pear-shaped, with the small end downward, and is about three inches long, two inches wide and one inch thick. It consists of layers of muscles enclosing a cavity which, owing to the thickness of the walls, is comparatively small. This cavity is triangular in shape and has three openings,—one at the lower end or mouth of the womb into the vagina and one at each side, near the top, into the fallopian tubes. The womb, or uterus as it sometimes is called, is not firmly attached nor adherent to any of the bony parts. It is suspended in the pelvic cavity and kept in place by muscles and ligaments. As the muscles and ligaments are elastic, the womb slightly changes its position with different movements of the body. Normally, it is inclined forward, resting on the bladder; so you see, a full bladder will push it backward, while a full rectum and intestines tend to push it forward and downward.

The lower end or mouth of the womb opens into the vagina, a distensible and curved muscular tube, which helps to support the womb and also connects it with the external parts. The vagina is about three and a half inches long. It often is called the birth canal because the baby must pass through it on its way from the womb to the external world.

The two upper openings of the womb lead into the fallopian tubes or oviducts, which are two small muscular tubes leading from the ovaries to the womb. Each one is about four inches long, but the opening through the center in its largest portion is only about as large as a broom straw, while near the womb it narrows down until it will admit only a fine bristle. When the ovum or seed leaves the ovary it must pass through one of these tubes to reach the womb, so you see how necessary it is that they be kept in good condition.

From the end of each tube, but not directly connected with it, is suspended a small almond-shaped body called the ovary. Each ovary is similar in shape and size to an almond, measuring about one and a half inches in length, three-fourths of an inch in width and one-half an inch in thickness. The function or work of the ovaries is to produce, develop and mature the ova (eggs) and to discharge them when fully formed so they may enter the tubes and so find their way to the womb. In every ovary there are several hundred little ovules or eggs in various stages of development. At irregular intervals one of these ovules ripens and leaves the ovary. It passes along the fallopian tube to the womb....