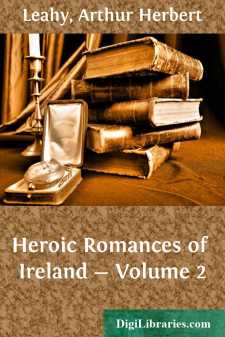 The Tain bo Fraich, the Driving of the Cattle of Fraech, has apparently only one version; the different manuscripts which contain it differing in very small points; most of which seem to be due to scribal errors.

Practically the tale consists of two quite separate parts. The first, the longer portion, gives the adventures of Fraech at the court of Ailill and Maev of Connaught, his courtship of their daughter, Finnabar, and closes with a promised betrothal. The second part is an account of an expedition undertaken by Fraech to the Alps "in the north of the land of the Long Beards," to recover stolen cattle, as well as his wife," who is stated by O'Beirne Crowe, on the authority of the "Courtship of Trebland" in the Book of Fermoy, to have been Trebland, a semi-deity, like Fraech himself. Except that Fraech is the chief actor in both parts, and that there is one short reference at the end of the second part to the fact that Fraech did, as he had promised in the first part, join Ailill and Maev upon the War of Cualnge, there is no connection between the two stories. But the difference between the two parts is not only in the subject-matter; the difference in the style is even yet more apparent. The first part has, I think, the most complicated plot of any Irish romance, it abounds in brilliant descriptions, and, although the original is in prose, it is, in feeling, highly poetic. The second part resembles in its simplicity and rapid action the other "fore tales" or preludes to the War of Cualnge contained in this volume, and is of a style represented in English by the narrative ballad.

In spite of the various characters of the two parts, the story seems to have been regarded as one in all the manuscripts which contain it; and the question how these two romances came to be regarded as one story becomes interesting. The natural hypothesis would be that the last part was the original version, which was in its earlier part re-written by a man of genius, possibly drawing his plot from some brief statement that Finnabar was promised to Fraech in return for the help that he and his recovered cattle could give in the Great War; but a difficulty, which prevents us from regarding the second part as an original legend, at once comes in. The second part of the story happens to contain so many references to nations outside Ireland that its date can be pretty well fixed. Fraech and his companions go, over the sea from Ulster, i.e. to Scotland; then through "north Saxon-land" to the sea of Icht (i.e. the sea of Wight or the English Channel); then to the Alps in the north of the land of the Long-Beards, or Lombards. The Long-Beards do not appear in Italy until the end of the sixth century; the suggestion of North Saxon-Land reaching down to the sea of Wight suggests that there was then a South Saxon-Land, familiar to an Irish writer, dating this part of the story as before the end of the eighth century, when both Saxons and Long-Beards were overcome by Charlemagne....