Heroes, or Greek Fairy Tales for My Children 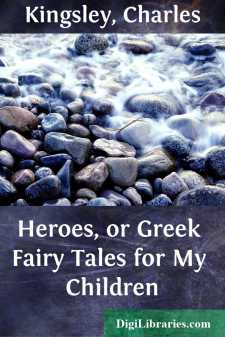 Some of you have heard already of the old Greeks; and all of you, as you grow up, will hear more and more of them.  Those of you who are boys will, perhaps, spend a great deal of time in reading Greek books; and the girls, though they may not learn Greek, will be sure to come across a great many stories taken from Greek history, and to see, I may say every day, things which we should not have had if it had not been for these old Greeks.  You can hardly find a well-written book which has not in it Greek names, and words, and proverbs; you cannot walk through a great town without passing Greek buildings; you cannot go into a well-furnished room without seeing Greek statues and ornaments, even Greek patterns of furniture and paper; so strangely have these old Greeks left their mark behind them upon this modern world in which we now live.  And as you grow up, and read more and more, you will find that we owe to these old Greeks the beginners of all our mathematics and geometry—that is, the science and knowledge of numbers, and of the shapes of things, and of the forces which make things move and stand at rest; and the beginnings of our geography and astronomy; and of our laws, and freedom, and politics—that is, the science of how to rule a country, and make it peaceful and strong.  And we owe to them, too, the beginning of our logic—that is, the study of words and of reasoning; and of our metaphysics—that is, the study of our own thoughts and souls.  And last of all, they made their language so beautiful that foreigners used to take to it instead of their own; and at last Greek became the common language of educated people all over the old world, from Persia and Egypt even to Spain and Britain.  And therefore it was that the New Testament was written in Greek, that it might be read and understood by all the nations of the Roman empire; so that, next to the Jews, and the Bible which the Jews handed down to us, we owe more to these old Greeks than to any people upon earth.

Now you must remember one thing—that ‘Greeks’ was not their real name.  They called themselves always ‘Hellens,’ but the Romans miscalled them Greeks; and we have taken that wrong name from the Romans—it would take a long time to tell you why.  They were made up of many tribes and many small separate states; and when you hear in this book of Minuai, and Athenians, and other such names, you must remember that they were all different tribes and peoples of the one great Hellen race, who lived in what we now call Greece, in the islands of the Archipelago, and along the coast of Asia Minor (Ionia, as they call it), from the Hellespont to Rhodes, and had afterwards colonies and cities in Sicily, and South Italy (which was called Great Greece), and along the shores of the Black Sea at Sinope, and Kertch, and at Sevastopol.  And after that, again, they spread under Alexander the Great, and conquered Egypt, and Syria, and Persia, and the whole East.  But that was many hundred years after my stories; for then there were no Greeks on the Black Sea shores, nor in Sicily, or Italy, or anywhere but in Greece and in Ionia.  And if you are puzzled by the names of places in this book, you must take the maps and find them out.  It will be a pleasanter way of learning geography than out of a dull lesson-book....