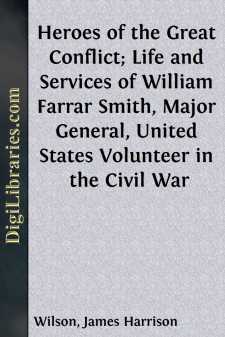 The publication of the Rebellion Records puts within the reach of every student the official reports of the various campaigns and battles of the Great Conflict, but something more is needed. They deal but slightly with men's motives, and still less with their personal peculiarities. They give only here and there any idea whatever of the origin of the plans of campaigns or battles and rarely any adequate description of the topography of the theatre of war, or of the difficulties to be overcome. They describe but superficially the organization, equipment, armament and supply of the troops, and leave their trials, hardships and extraordinary virtues largely to the imagination. They are entirely silent as to the qualities and idiosyncrasies of the leaders. Neither romance nor personal adventure finds any place within their pages, and fine writing is entirely foreign to their purpose. They are for the most part dry and unemotional in style, and are put together so far as possible chronologically in the order of their importance without the slightest reference to literary effect. While nothing is more untrustworthy generally than personal recollections of events which took place over a third of a century ago, those which are supported by letters and diaries are of inestimable value in construing and reconciling the official reports. But this is not all. The daily journals and other contemporaneous publications are quite important and cannot be safely left out of account. All must be taken into consideration before the final distribution of praise and blame is made, or the last word is written in reference to events or to the great actors who controlled or took part in them.

In the list of the most notable men of the day the name of Major General WILLIAM FARRAR SMITH must be recorded. He belonged at the outbreak of the Civil War, to that distinguished group of which Lee on the Southern side and McClellan on the Northern, were the center. Joseph E. Johnston and William B. Franklin were his most intimate friends, and I but recall what was then the popular belief when I state that they were widely regarded as the best educated and the most brilliant officers in the service. They were in middle life, in the full enjoyment of their powers, and it was the confident opinion of those who knew them best, that they were sure to become conspicuous leaders in the impending conflict. Great things were expected of them, and in this the world was not disappointed. They all reached high rank and great distinction, but only one of the group was fortunate enough to enroll himself amongst the world's great commanders. Johnston rose to the leadership of an independent army but failed to win a great victory or to secure the entire approval of his superiors. Franklin was without doubt a corps commander of sound judgment and unshakable courage, but he also failed to achieve the success that was expected of him, and to secure the support and confidence that his high character fully entitled him to look for from his Government. Smith who was not inferior to the ablest of his friends and contemporaries, in the art and science of war, had a career of great usefulness, in which he rendered services of extraordinary value and brilliancy but which ended in disappointment and unhappiness.

He was however not only a conspicuous officer connected with important events throughout his life, and especially during the Great Conflict, but he was a singularly virile and independent character who exerted great influence over all with whom he came in contact. He was strong, self-contained and deliberate in speech, and having been an industrious student and an acute thinker all his life, his opinions always commanded attention and respect. It so happened that his services brought him into the very focus of events on more than one occasion. It so happened also that I was more or less intimate with him to the time of his death, from the date of my entry into the Military Academy, where I had the good fortune to receive his instruction in mathematics. I first met him in the field, while I was serving temporarily on the staff of General McClellan, and he was commanding a division in the Antietam campaign, and next at Chattanooga, whither I was sent in advance of General Grant to prepare for his coming, after the disastrous battle of Chickamauga.

Shortly afterwards Smith was transferred to Grant's staff as Chief Engineer, and we messed and served together, in the closest intimacy throughout that campaign, and until I was assigned to duty in the War Department in charge of the Cavalry Bureau. I saw him frequently while I was commanding a division of cavalry and he an army corps in Grant's overland campaign against Richmond....