Hero Tales and Legends of the Rhine 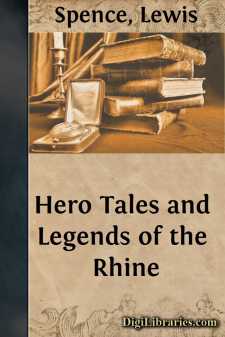 An abundance of literature exists on the subject of the Rhine and its legends, but with few exceptions the works on it which are accessible to English-speaking peoples are antiquated in spirit and verbiage, and their authors have been content to accept the first version of such legends and traditions as came their way without submitting them to any critical examination. It is claimed for this book that much of its matter was collected on the spot, or that at least most of the tales here presented were perused in other works at the scene of the occurrences related. This volume is thus something more than a mere compilation, and when it is further stated that only the most characteristic and original versions and variants of the many tales here given have gained admittance to the collection, its value will become apparent.

It is, of course, no easy task to infuse a spirit of originality into matter which has already achieved such a measure of celebrity as have these wild and wondrous tales of Rhineland. But it is hoped that the treatment to which these stories have been subjected is not without a novelty of its own. One circumstance may be alluded to as characteristic of the manner of their treatment in this work. In most English books on Rhine legend the tales themselves are presented in a form so brief, succinct, and uninspiring as to rob them entirely of that mysterious glamour lacking which they become mere material by which to add to and illustrate the guide-book. The absence of the romantic spirit in most English and American compilations dealing with the Rhine legends is noteworthy, and in writing this book the author’s intention has been to supply this striking defect by retaining as much of the atmosphere of mystery so dear to the German heart as will convey to the English-speaking reader a true conception of the spirit of German legend.

But it is not contended that because greater space and freedom of narrative scope than is usual has been taken by the author the volume would not prove itself an acceptable companion upon a voyage on Rhine waters undertaken in holiday times of peace. Indeed, every attempt has been made so to arrange the legends that they will illustrate a Rhine journey from sea to source—the manner in which the majority of visitors to Germany will make the voyage—and to this end the tales have been marshalled in such form that a reader sitting on the deck of a Rhine steamer may be able to peruse the legends relating to the various localities in their proper order as he passes them. There are included, however, several tales relating to places which cannot be viewed from the deck of a steamer, but which may be visited at the cost of a short inland excursion. These are such as from their celebrity could not be omitted from any work on the legends of Rhineland, but they are few in number.

The historical development, folklore, poetry, and art of the Rhine-country have been dealt with in a special introductory chapter. The history of the Rhine basin is a complicated and uneven one, chiefly consisting in the rapid and perplexing rise and fall of dynasties and the alternate confiscation of one or both banks of the devoted stream to the empires of France or Germany....