Heritage of the Desert 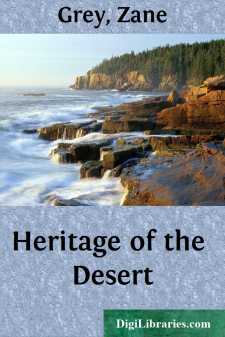 "BUT the man's almost dead."

The words stung John Hare's fainting spirit into life. He opened his eyes. The desert still stretched before him, the appalling thing that had overpowered him with its deceiving purple distance. Near by stood a sombre group of men.

"Leave him here," said one, addressing a gray-bearded giant. "He's the fellow sent into southern Utah to spy out the cattle thieves. He's all but dead. Dene's outlaws are after him. Don't cross Dene."

The stately answer might have come from a Scottish Covenanter or a follower of Cromwell.

"Martin Cole, I will not go a hair's-breadth out of my way for Dene or any other man. You forget your religion. I see my duty to God."

"Yes, August Naab, I know," replied the little man, bitterly. "You would cast the Scriptures in my teeth, and liken this man to one who went down from Jerusalem to Jericho and fell among thieves. But I've suffered enough at the hands of Dene."

The formal speech, the Biblical references, recalled to the reviving Hare that he was still in the land of the Mormons. As he lay there the strange words of the Mormons linked the hard experience of the last few days with the stern reality of the present.

"Martin Cole, I hold to the spirit of our fathers," replied Naab, like one reading from the Old Testament. "They came into this desert land to worship and multiply in peace. They conquered the desert; they prospered with the years that brought settlers, cattle-men, sheep-herders, all hostile to their religion and their livelihood. Nor did they ever fail to succor the sick and unfortunate. What are our toils and perils compared to theirs? Why should we forsake the path of duty, and turn from mercy because of a cut-throat outlaw? I like not the sign of the times, but I am a Mormon; I trust in God."

"August Naab, I am a Mormon too," returned Cole, "but my hands are stained with blood. Soon yours will be if you keep your water-holes and your cattle. Yes, I know. You're strong, stronger than any of us, far off in your desert oasis, hemmed in by walls, cut off by canyons, guarded by your Navajo friends. But Holderness is creeping slowly on you. He'll ignore your water rights and drive your stock. Soon Dene will steal cattle under your very eyes. Don't make them enemies."

"I can't pass by this helpless man," rolled out August Naab's sonorous voice.

Suddenly, with livid face and shaking hand, Cole pointed westward. "There! Dene and his band! See, under the red wall; see the dust, not ten miles away. See them?"

The desert, gray in the foreground, purple in the distance, sloped to the west. Eyes keen as those of hawks searched the waste, and followed the red mountain rampart, which, sheer in bold height and processional in its craggy sweep, shut out the north. Far away little puffs of dust rose above the white sage, and creeping specks moved at a snail's pace.

"See them? Ah! then look, August Naab, look in the heavens above for my prophecy," cried Cole, fanatically. "The red sunset—the sign of the times—blood!"

A broad bar of dense black shut out the April sky, except in the extreme west, where a strip of pale blue formed background for several clouds of striking color and shape....