Herein is Love A Study of the Biblical Doctrine of Love in Its Bearing on Personality, Parenthood, Teaching, and All Other Human Relationships. 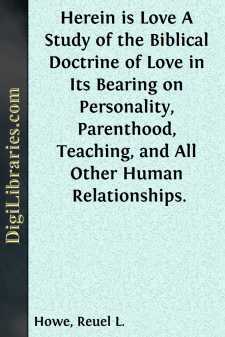 “There is no fear in love,

“It seems to me that the church has lost its influence. Nobody pays much attention to it any more, except some of its own members; and they don’t seem to be interested in anything except their own activities. The time was when the word of the minister carried weight. Some may not have agreed, but when the church spoke they paid attention. It’s not true now, though.”

Mr. Clarke eyed the others in the group as if he were testing their reactions to the statements he had just made. The church had always given him a sense of security, and now he was both worried that it seemed to have lost its power, and resentful that people no longer listened to its teaching.

He was one of a group of leaders of a local congregation who, at the request of their minister, were meeting to re-examine the purpose of the church. Not all of the group had arrived as yet, and the minister of the congregation, Mr. Gates, had been detained in his office by an emergency call upon his pastoral care.

Within the minute after Mr. Clarke finished, Mr. Wise spoke up. He was a thoughtful and compassionate member of the congregation who often raised the kind of questions that carried the discussion to deeper levels. When his questions were ignored, as they often were, he would smile good-naturedly and continue both as a contributor and as a question raiser. Turning to Mr. Clarke, he said: “I think I know how you feel. The statements of our ordained spiritual leaders are important, but do you think we should equate their words with—”12

As usual, Mr. Wise’s comment was interrupted, and this time by Mr. Churchill who, with evident irritation, protested against any concern over what others thought about the church. He said: “The church has got to be the church, and the world is different from it. I don’t like this ‘return to religion’ business. Christianity and the church aren’t supposed to be popular movements. If people want to join the church, that’s fine; but if they don’t, that’s their lookout. Let’s be the church and leave the world to itself.”

“But why was Christ born into the world—” began Mr. Wise.

“I don’t agree,” exclaimed Mrs. Strait, responding to Mr. Churchill’s comment and not hearing Mr. Wise. “I think we should be concerned about the world; concerned enough, at least, to set a good example, so that people will know what they’re supposed to live up to and to do. After all, Jesus told us how we should live, and He did so in such simple words that even children can understand them. All we have to do—and it’s written there for us to read—is to keep the commandments, imitate Jesus, and live a good life for ourselves and others.”

“Yes, but if it’s that simple, why don’t church people live better—”

“Not at all! Not at all!” pronounced the stately Mr. Knowles with some disdain. “I don’t agree with any of you. Our difficulties today result from the ignorance of our people, and the answer to the problem is education....