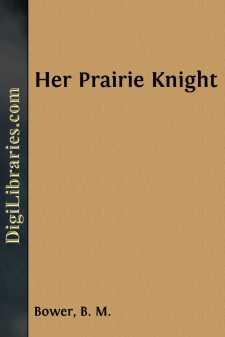 CHAPTER 1. Stranded on the Prairie.

"By George, look behind us! I fancy we are going to have a storm." Four heads turned as if governed by one brain; four pairs of eyes, of varied color and character, swept the wind-blown wilderness of tender green, and gazed questioningly at the high-piled thunderheads above. A small boy, with an abundance of yellow curls and white collar, almost precipitated himself into the prim lap of a lady on the rear seat.

"Auntie, will God have fireworks? Say, auntie, will He? Can I say prayers widout kneelin' down'? Uncle Redmon' crowds so. I want to pray for fireworks, auntie. Can I?"

"Do sit down, Dorman. You'll fall under the wheel, and then auntie would not have any dear little boy. Dorman, do you hear me? Redmond, do take that child down! How I wish Parks were here. I shall have nervous prostration within a fortnight."

Sir Redmond Hayes plucked at the white collar, and the small boy retired between two masculine forms of no mean proportions. His voice, however, rose higher.

"You'll get all the fireworks you want, young man, without all that hullabaloo," remarked the driver, whom Dorman had been told, at the depot twenty miles back, he must call his Uncle Richard.

"I love storms," came cheerfully from the rear seat—but the voice was not the prim voice of "auntie." "Do you have thunder and lightning out here, Dick?"

"We do," assented Dick. "We don't ship it from the East in refrigerator cars, either. It grows wild."

The cheerful voice was heard to giggle.

"Richard," came in tired, reproachful accents from a third voice behind him, "you were reared in the East. I trust you have not formed the pernicious habit of speaking slightingly of your birthplace."

That, Dick knew, was his mother. She had not changed appreciably since she had nagged him through his teens. Not having seen her since, he was certainly in a position to judge.

"Trix asked about the lightning," he said placatingly, just as he was accustomed to do, during the nagging period. "I was telling her."

"Beatrice has a naturally inquiring mind," said the tired voice, laying reproving stress upon the name.

"Are you afraid of lightning, Sir Redmond?" asked the cheerful girl-voice.

Sir Redmond twisted his neck to smile back at her. "No, so long as it doesn't actually chuck me over."

After that there was silence, so far as human voices went, for a time.

"How much farther is it, Dick?" came presently from the girl.

"Not more than ten—well, maybe twelve—miles. You'll think it's twenty, though, if the rain strikes 'Dobe Flat before we do. That's just what it's going to do, or I'm badly mistaken. Hawk! Get along, there!"

"We haven't an umbrella with us," complained the tired one. "Beatrice, where did you put my raglan?"

"In the big wagon, mama, along with the trunks and guns and saddles, and Martha and Katherine and James."

"Dear me! I certainly told you, Beatrice—"

"But, mama, you gave it to me the last thing, after the maids were in the wagon, and said you wouldn't wear it. There isn't room here for another thing....