Hendricks the Hunter The Border Farm, a Tale of Zululand 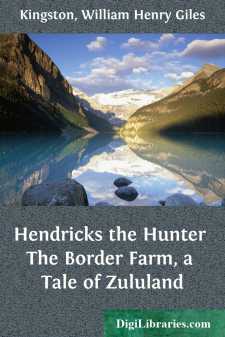 The Trader in Zululand.

Zululand is a wild region of mountain ranges, deep valleys and gorges, roaring torrents, rapidly flowing rivers, plains covered with mimosa bushes, meadows where cattle pasture and grow fat, and level plateaux extending for many miles across it, several hundred feet above the level of the ocean; while scattered here and there, in some parts pretty thickly, are to be seen the kraals or villages and the mealy grounds of the natives. Wild as is the country, and although roads, properly speaking, there are none, it is sufficiently practicable for waggons in various directions.

Some few years back, one of these vehicles, drawn by a span of twelve oxen, was seen slowly wending its way to the south-west, in the direction of Natal. It was a loosely yet strongly built machine on four wheels, fourteen feet long and four wide, formed of well-seasoned stink wood, the joints and bolts working all ways, so that, as occasionally happened, as it slowly rumbled and bumped onward, when the front wheel sank into a deep hole, the others remained perfectly upright. It was tilted over with thick canvas impervious to rain, the goods or passengers inside being thus well sheltered from the hardest showers, and even from the hot rays of the sun.

The oxen pulled steadily together, as became animals long accustomed to work in company. On a board in front stood a Hottentot driver, his black visage surmounted by a broad-brimmed straw hat ornamented by a few ostrich feathers twined round the crown, while his hand held a whip of Brobdignagian proportions, the stock being fully fourteen feet, and the lash upwards of twenty-four feet in length, with which he occasionally urged on the leaders, or drew blood from the animals beneath his feet, as well as from those intermediate in the span, whenever a rise in the ground or its unusual roughness required an additional exertion of their strength.

Several black men, of tall sinewy forms and Kaffir features, each carrying a gun at his back, and a long pole in his hand, accompanied the waggon on foot. At some little distance ahead rode a florid, good-looking man, above the middle height, and of strongly built figure, dressed in a grey suit, with a broad-brimmed hat on his head. He also carried a gun at his back and a brace of pistols in a broad belt which he wore round his waist. Though his hair and beard were slightly grizzled, yet, by the expression of his countenance and his easy movements, he appeared to have lost none of the activity of youth, while his firm-set mouth and bright blue eyes betokened courage and energy. Some horses followed the waggon, secured by thongs of a length sufficient to enable them to pick their way. A glance into the interior of the waggon would have shown that it was fully loaded, the chief contents being the skins of wild animals, the huge tusks of elephants, and other spoils of the chase, with which the proprietor was returning after a hunt of many months’ duration, to dispose of them at Maritzburg or D’Urban....