Helps to Latin Translation at Sight 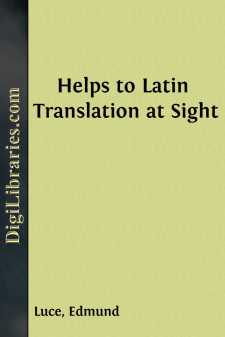 The aim of the present book is to help boys to translate at sight. Of the many books of unseen translation in general use few exhibit continuity of plan as regards the subject-matter, or give any help beyond a short heading. The average boy, unequal to the task before him, is forced to draw largely upon his own invention, and the master, in correcting written unseens, has seldom leisure to do more than mark mistakes—a method of correction almost useless to the boy, unless accompanied by full and careful explanation when the written work is given back.

Now that less time is available for Latin and Greek, new methods of teaching them must be adopted if they are to hold their own in our public schools. When Lord Dufferin could say, ‘I am quite determined, so far as care and forethought can prevent it, that the ten best years of my boy’s life shall not be spent (as mine were) in nominally learning two dead languages without being able to translate an ordinary paragraph from either without the aid of a dictionary;’ and Dr. Reid could write, ‘It is not too much to say that a large number of boys pass through our schools without ever dreaming that an ancient writer could pen three consecutive sentences with a connected meaning: chaos is felt to be natural to ancient literature: no search is made for sense, and the Latin or Greek book is looked upon as a more or less fortuitous concourse of words;’ when Dr. Rouse can assert, ‘The public schoolboy at nineteen is unable to read a simple Latin or Greek book with ease, or to express a simple series of thoughts without atrocious blunders: he has learnt from his classics neither accuracy nor love of beauty and truth’—it is obvious that, for the average boy, the system of perfunctorily prepared set-books and dashed-off unseens is a failure. The experience of every teacher who is also an examiner, and who has had to deal with public schoolboys, will confirm this; but during twenty-five years’ teaching and examining of boys in almost every stage, I have found that translation at sight, taught upon the plan of this book, not only produces a good result, but teaches a boy how to grapple with the bare text of a Latin author better than the habitual practice of translating at sight without any help at all. If the average boy is to be taught how to translate, his interest must be awakened and sustained, and the standard of routine work made as high as possible. The clever boys are, as a rule, well provided for; but, even for them, the methods of this book have been found to be the shortest road to accuracy and style in translation. Moreover by this means they have gained a firsthand acquaintance with Latin literature and the sources of Roman history.

It is impossible here to enter into ‘the question of the close and striking correspondence between the history, the literature, and the language of Rome. It was not until the history of Rome threw its mantle over her poetry that the dignity of the poet was recognised and acknowledged. . . . In the same way the life of the Roman people is closely bound up with the prose records, and the phenomena of the Roman Empire lend a human interest to all representative Roman writers.’ Considerations of this kind form a sufficient justification of the method here adopted of employing the historical records of Rome as a basis of teaching.

In this book the Introduction (pp. 1-14) is written to teach a boy how to arrive at the meanings of words (Helps to Vocabulary, pp. 1-5); how to find out the thought of a sentence through analysis and a knowledge of the order of words in Latin (Helps to-Translation, pp....