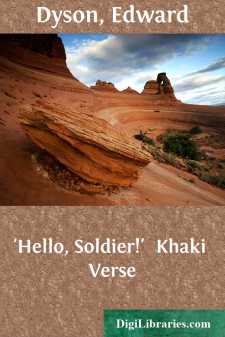 MARCHING somewhat out of order   when the band is cock-a-hoop,There's a lilting kind of magic in the swagger   of the troop,Swinging all aboard the steamer with her   nose toward the sea.What is calling, Billy Khaki, that you're foot-   ing it so free?

Though his lines are none too level,   And he lacks a bit of style.And he's swanking like the devil   Where the women wave and smile,He will answer with a rifle   Trim and true from stock to bore,Where the comrades crouch and stifle   In the reeking pit of war.

What is calling, Billy Khaki? There is   thunder down the sky,And the merry magpie bugle splits the morn-   ing with its cry,While your feet are beating rhythms up the   dusty hills and down,And the drums are all a-talking in the hollow   of the town.

Billy Khaki, is't the splendor of the song the   kiddies sing,Or the whipping of the flags aloft that sets   your heart a-swing?Is't the cheering like a paean of the toss-   ing, teeming crowds,Or the boom of distant cannon flatly bumping   on the clouds ?

What's calling, calling, Billy? 'Tis the rattle far away Of the cavalry at gallop and artillery in play; 'Tis the great gun's fierce concussion, and the smell of seven hells When the long ranks go to pieces in the sneezing of the shells.

But your eyes are laughing, Billy, and a ribald song you sing, While the old men sit and tell us war it is a ghastly thing, When the swift machines are busy and the grim, squat fortress nocks At your bolts as vain as eggs of gulls that spatter on the rocks.

When the horses sweep upon you to complete   a sudden rout,Or in fire and smoke and fury some brave   regiment goes out,War is cruel, Bill, and ugly. But full well   you know the rest,Yet your heart is for the battle, and your face   is to the west.

For if war is beastly, Billy, you can picture   something worse—There's the wrecking of an empire, and its   broken people's curse;There are nations reft of freedom, and of hope   and kindly mirth,And the shadow of an evil black upon the   bitter earth.

So we know what's calling, Billy. 'Tis the   spirit of our race,And its stir is in your pulses, and its light is   on your faceAs you march with clipping boot-heels   through the piping, howling townTo uphold the land we live in, and to pull a   tyrant down.

Thou his lines are none too level,   And he's not a whale for style,And he's swanking like the devil   When the women wave and smileHe will answer with a rifle,   Trim and true from stuck to bore,When the comrades sit and stifle   In the smoking pit of war.

AS THE TROOP WENT THROUGH

I HEARD this day, as I may no more,The world's heart throb at my workshop door.The sun was keen, and the day was still;   The township drowsed in, a haze of heat.A stir far off on the sleepy hill,   The measured beat of their buoyant feet,      And the lilt and thrum      Of a little drum,The song they sang in a cadence low,The piping note of a piccolo....