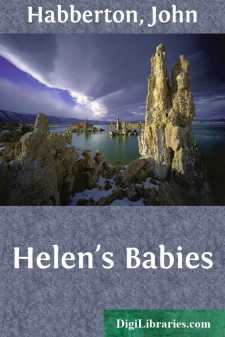 The first cause, so far as it can be determined, of the existence of this book may be found in the following letter, written by my only married sister, and received by me, Harry Burton, salesman of white goods, bachelor, aged twenty-eight, and received just as I was trying to decide where I should Spend a fortnight's vacation:—

"DEAR HARRY:—Remembering that you are always complaining that you never have a chance to read, and knowing that you won't get it this summer, if you spend your vacation among people of your own set, I write to ask you to come up here. I admit that I am not wholly disinterested in inviting you. The truth is, Tom and I are invited to spend a fortnight with my old schoolmate, Alice Wayne, who, you know, is the dearest girl in the world, though you DIDN'T obey me and marry her before Frank Wayne appeared. Well, we're dying to go, for Alice and Frank live in splendid style; but as they haven't included our children in their invitation, and have no children of their own, we must leave Budge and Toddie at home. I've no doubt they'll be perfectly safe, for my girl is a jewel, and devoted to the children, but I would feel a great deal easier if there was a man in the house. Besides, there's the silver, and burglars are less likely to break into a house where there's a savage-looking man. (Never mind about thanking me for the compliment.) If YOU'LL only come up, my mind will be completely at rest. The children won't give you the slightest trouble; they're the best children in the world—everybody says so.

"Tom has plenty of cigars, I know, for the money I should have had for a new suit went to pay his cigar-man. He has some new claret, too, that HE goes into ecstasies over, though I can't tell it from the vilest black ink, except by the color. Our horses are in splendid condition, and so is the garden—you see I don't forget your old passion for flowers. And, last and best, there never were so many handsome girls at Hillcrest as there are among the summer boarders already here; the girls you already are acquainted with here will see that you meet all the newer acquisitions.

"Reply by telegraph right away.

"In great haste, your loving

P. S. You shall have our own chamber; it catches every breeze, and commands the finest views. The children's room communicates with it; so, if anything SHOULD happen to the darlings at night, you'd be sure to hear them."

"Just the thing!" I ejaculated. Five minutes later I had telegraphed Helen my acceptance of her invitation, and had mentally selected books enough to busy me during a dozen vacations. Without sharing Helen's belief that her boys were the best ones in the world, I knew them well enough to feel assured that they would not give me any annoyance. There were two of them, since Baby Phil died last fall; Budge, the elder, was five years of age, and had generally, during my flying visits to Helen, worn a shy, serious, meditative, noble face, with great, pure, penetrating eyes, that made me almost fear their stare. Tom declared he was a born philanthropist or prophet, and Helen made so free with Miss Muloch's lines as to sing:—

"Ah, the day that THOU goest a-wooing,Budgie, my boy!"

Toddie had seen but three summers, and was a happy little know-nothing, with a head full of tangled yellow hair, and a very pretty fancy for finding out sunbeams and dancing in them....