by Harold B. (Harold Bruce) Hunting 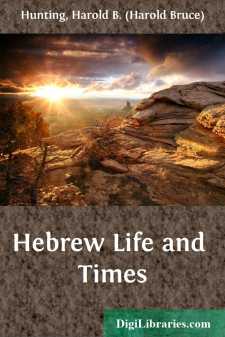 CHAPTER I SHEPHERDS ON THE BORDER OF THE DESERT

Ancient Arabia is the home of that branch of the white race known as the Semitic. Here on the fertile fringes of well-watered land surrounding the great central desert lived the Phœnicians, the Assyrians, the Babylonians, and the Canaanites who, before the Hebrews, inhabited Palestine. So little intermixing of races has there been that the Arabs of to-day, like those of the time of Abraham, are Semites.

The Hebrew people are an offshoot of this same Semitic group. They began their career as a tribe of shepherds on the border of the north Arabian desert. The Arab shepherds of to-day, still living in tents and wandering to and fro on the fringes of the settled territory of Palestine, or to the south and west of Bagdad, represent almost perfectly what the wandering Hebrew shepherds used to be.

The Arabs of to-day are armed with rifles, whereas Abraham's warriors cut down their enemies with bronze swords. Otherwise, in customs, superstitions, and even to some extent in language, the modern desert Arabs may stand for the ancient Hebrews in their earliest period. They were nomads with no settled homes. Every rainy season they led out their flocks into the valleys where the fresh green of the new grass was crowding back the desert brown. All through the spring and early summer they went from spring to spring, and from pasture to pasture seeking the greenest and tenderest grass. Then as the dry season came on and the barren waste came creeping back they also worked their way back toward the more settled farm lands, until autumn found them selling their wool to the nearby farmers and townspeople in exchange for wheat and barley and some of the other necessaries of life.

Sheep-raising might seem at times a peaceful and even a somewhat monotonous business. The flocks found their own food, grazing in the pastures. Morning and night they had to be watered, the water being drawn from the well and poured into watering troughs. Once or twice a day also the ewes and shegoats had to be milked. When these chores were done it was only necessary to stand guard over the flock and protect them from robbers or wild animals. This, however, had to be done by night as well as by day. On these wide pastures there were no sheepfolds into which the animals could be securely herded as on the settled farms. They slept on the ground, under the open sky, and the shepherds, like those in Bethlehem, in the story of Jesus' birth, had to keep "watch over their flocks by night." So long as no enemies appeared there was in such an occupation plenty of time in which to think and dream of God and man and love and duty. Very often, however, the dreamer's reveries were interrupted, and at such times there was no lack of excitement.

Wild beasts.—There were more beasts of prey in Arabia in those days than there are to-day. In addition to wolves and bears, there were many lions, which are not now found anywhere in the world except in Africa....