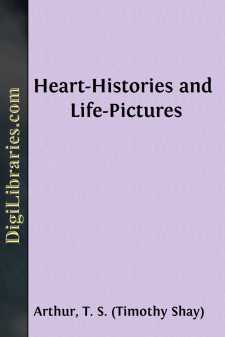 "THERE is a book of record in your mind, Edwin," said an old man to his young friend, "a book of record, in which every act of your life is noted down. Each morning a blank page is turned, on which the day's history is written in lines that cannot be effaced. This book of record is your memory; and, according to what it bears, will your future life be happy or miserable. An act done, is done forever; for, the time in which it is done, in passing, passes to return no more. The history is written and sealed up. Nothing can ever blot it out. You may repent of evil, and put away the purpose of evil from your heart; but you cannot, by any repentance, bring back the time that is gone, nor alter the writing on the page of memory. Ah! my young friend, if I could only erase some pages in the book of my memory, that almost daily open themselves before the eyes of my mind, how thankful I would be! But this I cannot do. There are acts of my life for which repentance only avails as a process of purification and preparation for a better state in the future; it in no way repairs wrong done to others. Keep the pages of your memory free from blots, Edwin. Guard the hand writing there as you value your best and highest interests!"

Edwin Florence listened, but only half comprehended what was said by his aged friend. An hour afterwards he was sitting by the side of a maiden, her hand in his, and her eyes looking tenderly upon his face. She was not beautiful in the sense that the world regards beauty. Yet, no one could be with her an hour without perceiving the higher and truer beauty of a pure and lovely spirit. It was this real beauty of character which had attracted Edwin Florence; and the young girl's heart had gone forth to meet the tender of affection with an impulse of gladness.

"You love me, Edith?" said Edwin, in a low voice, as he bent nearer, and touched her pure forehead with his lips.

"As my life," replied the maiden, and her eyes were full of love as she spoke.

Again the young man kissed her.

In low voices, leaning towards each other until the breath of each was warm on the other's cheek, they sat conversing for a long time. Then they separated; and both were happy. How sweet were the maiden's dreams that night, for, in every picture that wandering fancy drew, was the image of her lover!

Daily thus they met for a long time. Then there was a change in Edwin Florence. His visits were less frequent, and when he met the young girl, whose very life was bound up in his, his manner had in it a reserve that chilled her heart as if an icy hand had been laid upon it. She asked for no explanation of the change; but, as he grew colder, she shrunk more and more into herself, like a flower folding its withering leaves when touched by autumn's frosty fingers.

One day he called on Edith. He was not as cold as he had been, but he was, from some cause, evidently embarrassed.

"Edith," said he, taking her hand—it was weeks since he had touched her hand except in meeting and parting—"I need not say how highly I regard you....