Hayslope Grange A Tale of the Civil War 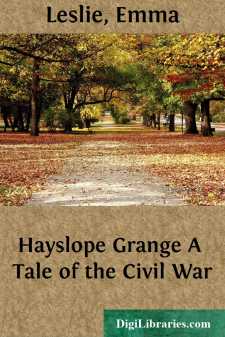 It was a sweet spring day, soft and balmy as summer, and any one looking across the green meadows and smiling uplands of Hayslope, now so full of the promise of early fruitfulness, would have wondered what could make the farm-labourers appear so gloomy, and the women-folk sigh instead of singing at their work, if he knew nothing of what was going on a few miles away.

It was the year 1644, and for two long years civil war had been raging in England, and now two rival Parliaments were sitting, the one presided over by the King meeting at Oxford, while that in London was engaged upon the trial of Archbishop Laud, and levying war against the King, so that it was not to be wondered at that men looked gloomy and sorrowful, for they were dark, sad times for everybody.

Hayslope was a little village on the borders of Essex, but quite out of the high road usually taken by travellers going from London northward, so that when a young man came riding in towards the middle of the day, everybody turned from their work to look at him. They did not make a very close inspection before they raised their hats and cheered; but this greeting, pleasant as it was, scarcely brought a smile to his lips as he rode on up to the principal house in the place—Hayslope Grange. This was a large, rambling, roomy building, half farm-house, half mansion, standing in the midst of an old-fashioned garden, surrounded by fields, and enclosed with a moat. The moat was dry now, and had been for some years, and a permanent bridge of planks had been laid across, leading to the village; Master Drury would not have it filled up. "It might be useful yet," he would say, when his son Harry pressed him to make the alteration.

As the traveller reached the old moss-grown bridge he paused for a minute or two, and looked down at the broad deep trench. "God grant it never may be wanted," he murmured; and then he threw back his long brown curls that clustered round his head, and spurred his horse on at a quicker pace. He was a fine, tall, handsome young man, about twenty-two, with a thoughtful brow that would have made him look almost stern, but for the genial smile that played around his mouth, and the kindly eyes that looked as ready to cry as a girl's at a tale of suffering. Before he was half-way across the fields he was met with the glad cry of, "Harry, Harry, I am so glad you have come home!"

That he was a general favourite at home was evident enough, for his younger sister and brother received him with screams of delight, and his elder sister, Mary, forgot all her stateliness in the warmth of her welcome. Only one of the group walking in the fields failed to run forward to meet him—a fact Harry was not slow to notice.

"So Maud would not come to greet me," he said, holding out his hand when he reached the spot where she was standing. He had sprung from his horse, and left the animal to find his own way to the stable.

The young lady coloured and looked down as Harry stopped before her. "I am very glad to see you," she said....