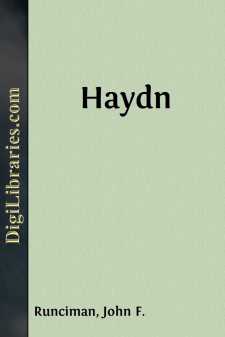 It is, as a rule, inexpedient to begin a book with the peroration. Children are spared the physic of the moral till they have sucked in the sweetness of the tale. Adults may draw from a book what of good there is in it, and close it before reaching the chapter usually devoted to fine writing. But the case of Haydn is extraordinary. One can only sustain interest in a biography of the man by an ever-present sense that he is scarcely to be written about. All an author can do is, in few or many words, to put a conundrum to the reader—a conundrum that cannot even be stated in exciting terms. This apparition and wonder-worker of the eighteenth century, Franz Joseph Haydn, is compact of paradoxes and contradictions. Born a peasant, and remaining in thought and speech a peasant all his days, he became the friend of princes, dukes, and, generally speaking, very high society indeed—and this in days when class distinctions had to be observed. He effected a revolution in music, and revolutionists must have daring; and save in music he showed no sign of unusual daring. His shaping and handling of new forms called for high intellect, and he displayed no intellect whatever in any other way—nothing beyond a canny, cunning shrewdness. Until he was sixty his life was a plodding one of dull regularity and routine; only his later adventures in England are in themselves of interest. The bare facts of his existence might be given in a few pages. Look at him from any point of view, and we see nothing but his simplicity; yet it is hard to believe that a man who achieved such great things was in reality simple. If only we had his inner spiritual biography! And even then one wonders whether we would have much. If Haydn actually knew his own secret—which I take leave to doubt—he certainly kept it. "The daemon of music," said Wagner, "revealing itself through the mind of a child"—which tells us nothing. In reading his Life we must perpetually bear in mind the mighty changes he wrought in and for music, else we shall not read far. Wherefore, first roughly to outline his achievement is the reason why I open with a peroration of a sort.

Haydn found music in the eighteenth-century stage, and carried it on to the nineteenth-century stage—in some respects a very advanced nineteenth-century stage. The problem he had to solve was as easy as that set by Columbus to the wiseacres, when once it was worked. It was how to combine organic unity of form and continuity with dramatic variety and the expressiveness of simple heartfelt song. From the date of the invention of music written and sung in parts, a similar problem had been set successive generations of musicians, and solved by each according to its needs and lights. At first words were indispensable; they were, if not the backbone of the music, at least the string on which the pearls might be strung. The first veritable composers—in setting, for instance, the words of the Mass—took for a beginning a fragment of Church melody, or, to the great scandal of the ecclesiastics, secular melody....