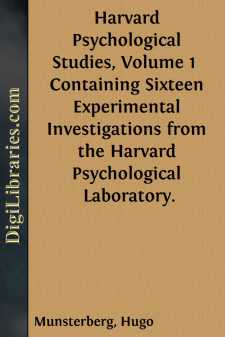 I. THE PROBLEM OF ANÆSTHESIA DURING EYE-MOVEMENT.

A first suggestion of the possible presence of anæsthesia during eye-movement is given by a very simple observation. All near objects seen from a fairly rapidly moving car appear fused. No further suggestion of their various contour is distinguishable than blurred streaks of color arranged parallel, in a hazy stream which flows rapidly past toward the rear of the train. Whereas if the eye is kept constantly moving from object to object scarcely a suggestion of this blurred appearance can be detected. The phenomenon is striking, since, if the eye moves in the same direction as the train, it is certain that the images on the retina succeed one another even more rapidly than when the eye is at rest. A supposition which occurs to one at once as a possible explanation is that perchance during eye-movement the retinal stimulations do not affect consciousness.

On the other hand, if one fixates a fly which happens to be crawling across the window-pane and follows its movements continuously, the objects outside swim past as confusedly as ever, and the image of the fly remains always distinct. Here the eye is moving, and it may be rapidly, yet both the fly and the blurred landscape testify to a thorough awareness of the retinal stimulations. There seems to be no anæsthesia here. It may be, however, that the eye-movement which follows a moving object is different from that which strikes out independently across the visual field; and while in the former case there is no anæsthesia, perhaps in the latter case there is anæsthesia.

Cattell, in considering a similar experience, gives his opinion that not the absence of fusion for the moving eye, but its presence for the resting eye, needs explanation. "More than a thousand interruptions per second," he believes, "give a series of sharply defined retinal processes." But as for the fusion of moving objects seen when the eyes are at rest, Cattell says, "It is not necessary and would probably be disadvantageous for us to see the separate phases." Even where distinct vision would be 'disadvantageous' he half doubts if fusion comes to the rescue, or if even the color-wheel ever produces complete fusion. "I have never been able," he writes, "to make gray in a color-wheel from red and green (with the necessary correction of blue), but when it is as nearly gray as it can be got I see both red and green with an appearance of translucence."

That the retina can hold apart more than one thousand stimulations per second, that there is, in fact, no such thing as fusion, is a supposition which is in such striking contrast to all previous explanations of optical phenomena, that it should be accepted only if no other theory can do justice to them. It is hoped that the following pages will show that the facts do not demand such a theory.

Another simple observation is interesting in this connection. If at any time, except when the eyes are quite fresh, one closes one's eyes and attends to the after-images, some will be found which are so faint as to be just barely distinguishable from the idioretinal light....