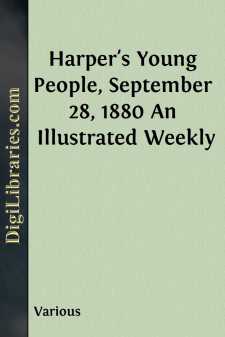 In one corner of the Bois de Boulogne is a pretty zoological garden known as the Jardin d'Acclimatation. The Bois de Boulogne is the pleasure-ground of Paris, and is one of the most beautiful parks in the world. It comprises about twenty-five hundred acres of majestic forests and open grassy meadows, through which flow picturesque streams, tumbling over rocky cliffs in glistening cascades, or spreading out into broad tranquil lakes, upon which float numbers of gay pleasure-boats filled on sunny summer afternoons with crowds of happy children.

But the place where the children are happiest is the Jardin d'Acclimatation. There are no savage beasts here to frighten the little ones with their roaring and growling. The lions and tigers and hyenas are miles away, safe in their strong cages in the Jardin des Plantes, on the other side of the big city of Paris; and in this charming spot are gathered only those members of the great animal kingdom which in one way or another are useful to man.

The Jardin d'Acclimatation has been in existence about twenty-five years. In 1854 a society was formed in Paris for the purpose of bringing to France, from all parts of the world, beasts, birds, fishes, and other living things, which in their native countries were in any way serviceable, and to make every effort to accustom them to the climate and soil of France. The city of Paris ceded to the society a space of about forty acres in a quiet corner of the great park, and the preparation of the ground for the reception of its strange inhabitants was begun at once. The ponds were dug out and enlarged, the meadows were sodded with fresh, rich grass, spacious stalls were built, and a big kennel for dogs, aviaries for birds, aquaria for fish, and a silk-worm nursery, were all made ready. A large greenhouse was also erected for the cultivation of foreign plants. Here the animals were not brought simply to be kept on exhibition, but they were made as comfortable and as much at home as possible.

On pleasant afternoons troops of children with their mammas or nurses crowd the walks and avenues of the Jardin d'Acclimatation. Here, in a comfortable airy kennel, are dogs from all parts of the world, some of them great noble fellows, who allow the little folks to fondle and stroke them. On a miniature mountain of artificial rock-work troops of goats and mouflons—a species of mountain sheep—clamber about, as much at home as if in their far-away native mountains. Under a group of fir-trees a lot of reindeer are taking an afternoon nap, lost in dreams of their home in the distant North. Grazing peacefully on the broad meadows are antelopes, gazelles, and all kinds of deer; and yaks from Tartary, llamas from the great South American plains, Thibet oxen, and cattle of all kinds are browsing in their particular feeding grounds.

In a pretty sunny corner is a neat little chalet inclosed in a yard filled with fresh herbage. A cozy little home indeed, and there, peering inquisitively through the open door, is one of the owners of this mansion—a funny kangaroo, standing as firmly on its haunches as if it scorned the idea of being classed among the quadrupeds....