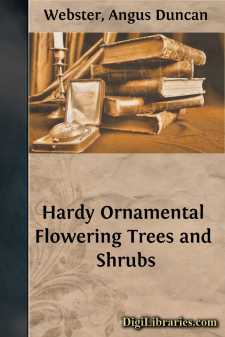 ABELIA CHINENSIS (syn A. rupestris).—The Rock Abelia China, 1844. This is a neat, twiggy shrub, growing from 2 ft. to 3 ft. high, with slender shoots, and very pleasing, shining green serrated leaves. The tubular, sweet-scented flowers are produced in clusters at the ends of the shoots, even the smallest, and are of a very delicate shade of pink—indeed, almost white. It makes an excellent wall plant, but by no means refuses to grow and flower freely without either shelter or protection, provided a fairly rich and well drained soil is provided. From August to October is the flowering period of this handsome deciduous shrub. This is the only really hardy species of the genus, for though the rosy-purple flowered A. floribunda from Mexico has stood for several years uninjured in the South of England, it is not to be relied upon. Both species are readily propagated from cuttings.

A. TRIFLORA.—Himalayan regions, 1847. A half-hardy and beautiful species with small lanceolate, entire leaves, and pretty star-shaped flowers that are white and flushed with pink. The long, narrow, and hairy calyx-lobes give a light and feathery appearance to the flowers, which are produced continuously from May to November. It does best as a wall plant, and several beautiful examples may be seen in and around London, as also at Exeter, and in the South of Ireland.

ADENOCARPUS DECORTICANS (syn A. Boissieri).—Spain, 1883. This little known hardy shrub, a native of the Sierra Nevada mountains, in Spain, is one of great beauty, and well worthy of extended culture. The flowers are produced abundantly, and are of a bright yellow colour, resembling those of our common Broom, to which family it is nearly allied. Peaty soil suits it well, and repeated trials have clearly proved that it is hardy, at least in the South of England.

AESCULUS CALIFORNICA (syn Pavia californica).—California. This is one of the handsomest species, of low, spreading habit, and blooming freely about midsummer.

AE. GLABRA (syn Ae. rubicunda).—Red-flowered Horse Chestnut. North America, 1820. If only for its neat and moderate growth, and attractive spikes of brightly-coloured flowers, this species must be considered as one of the handsomest and most valuable of small growing trees. Being of moderate size, for we rarely meet with specimens of greater height than 30 feet, and of very compact habit, it is rendered peculiarly suitable for planting in confined spots, and where larger growing and more straggling subjects would be out of place. It withstands soot and smoke well, and is therefore much valued for suburban planting. The long spikes of pretty red flowers are usually produced in great abundance, and as they stand well above the foliage, and are of firm lasting substance, they have a most pleasing and attractive appearance. As there are numerous forms of the red-flowered Horse Chestnut, differing much in the depth of flower colouring, it may be well to warn planters, for some of these have but a faint tinge of pink overlying a dirty yellowish-green groundwork, while the finest and most desirable tree has the flowers of a decided pinky-red....