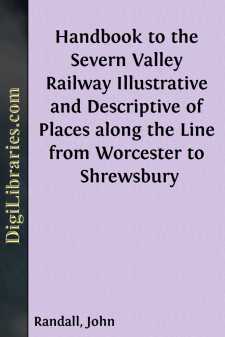 LEGEND OF THE SEVERN, WYE, AND RHEIDOL.

(See Illustration on the Cover.)

The Welsh are justly proud of their hills and their rivers; they frequently personify both, and attribute to them characters corresponding with their peculiar features.  Of the Severn, the Wye, and the Rheidol, they have an apologue, intended to convey an idea of their comparative length, and also of the character of the districts through which they flow.  It is called “The Three Sisters,” and in substance is as follows:—In some primitive period of the earth’s history, Father Plinlimmon promised to these nymphs of the mountain as much territory as they could compass in a day’s journey to the sea, by way of dowry upon their alliance with certain marine deities they should meet there.  Sabra, goddess of the Severn, being a prudent, well-conducted maiden, rose with the first streak of morning dawn, and, descending the eastern side of the hill, made choice of the most fertile valleys, whilst as yet her sisters slept.  Vaga, goddess of the Wye, rose next, and, making all haste to perform her task, took a shorter course, by which means she joined her sister ere she reached the sea.  The goddess Rhea, old Plinlimmon’s pet, woke not till roused by her father’s chiding; but by bounding down the side of the mountain, and selecting the shortest course of all, she managed to reach her destination first.  Thus the Cymric proverb, “There is no impossibility to the maiden who hath a fortune to lose or a husband to win.”

The Severn, like other English rivers, may be said to have been the pioneer of railways along its banks: first, in having done much to correct the inequalities of the surface; secondly, in having indicated the direction in which the traffic flowed; so that early in the history of railway enterprise eminent engineers, like the late Robert Stephenson, saw the desirability of following its course, and thus meeting the wants of towns that had grown into importance upon its banks, wants which the river itself was unable to supply.  In 1846 the route was finally surveyed by Robert Nicholson, with a view to a through traffic in connection with other railways.  The scheme met with opposition from advocates of rival lines.  Ultimately, however, the Bill passed the committees of the two Houses, and the promoters were successful, whilst the expenses of counsel and witnesses were enormous.  The original estimate for the line was £600,000: £110,000 for land, and £490,000 for works.  £8,500 was down for a girder bridge at Arley, £8,000 for one near Quatford, £9,000 for one above Bridgnorth, and £10,000 for one at Shrewsbury.  The two bridges near Bridgnorth and the one near Shrewsbury were abandoned, and a considerable saving was effected by shortening the line at Hartlebury, by a junction, with the Oxford, Wolverhampton, and Worcester higher up than was originally intended.  The estimated cost of the works, in consequence of these reductions, and of the determination of the company to make it a single line, was thus reduced to nearly one-half the original sum.

Although the Severn Valley Railway joins the Main Trunk line at Hartlebury, Worcester is regarded as its proper terminus; and at that point we commence our description.

Our engraving represents the “faithful city” as it appears from a point between the bridges, with the Cathedral rising from an eminence above the river.  The venerable pile was raised by the brave and pious bishop Wulstan, upon the site of an earlier edifice, formerly the church of a priory founded by one of the Saxon kings.  Recent restorations, carried on under the direction of the Dean and Chapter, have led to the correction of defects, resulting from time, and ignorance on the part of past builders, and have disclosed features which add much to the grandeur of the edifice; so that in addition to impressions its magnificence creates upon the mind of the general visitor, it now affords a rich treat to all who delight to trace the boundary lines of ecclesiastical architecture, as they approach or recede from the present time.  First, there is the Norman or Romanesque of the period of its erection, of which the crypt and part of the central transept are specimens; secondly, the First Pointed or Early English, as seen in the eastern transept; thirdly, the Middle Pointed or Decorated, as in the tower, guesten hall, and refectory; and, fourthly, the Third Pointed or Perpendicular, as in the north porch, in the cloisters, and Prince Arthur’s Chapel.  Amongst ancient mural monuments, covering the dust or commemorating the virtues of the great, will be found King John’s tomb, in the centre of the choir; one in white marble of Prince Arthur; and those of bishops Sylvester, Gauden, Stillingfleet, Thornborough, Parry, and Hough, the latter a chef d’œuvre of Roubilliac’s; also that of Judge Lyttleton, “the father of English law;” and others of men renowned for learning, piety, or bravery.  Near this fine old ecclesiastical edifice once stood the feudal stronghold that protected it, the only remaining portion of which is a crumbling mass of stone known as Edgar’s Tower.  From standing in the college precincts it is sometimes mistaken for a portion of the cathedral; it is, however, a relic of the old castle, the keep of which rested on a mound of sand and gravel, which was found to contain, upon its removal in 1833, Roman remains of the reigns of Augustus, Nero, Vespasian, and Constantine.  In High Street, leading from the Cathedral to the Cross, is the Guildhall, erected from a design by a pupil of the great Sir Christopher Wren, and considered to be one of the most handsome brick-fronted structures in the kingdom.  It is decorated with statues of Charles I., Charles II., Queen Anne, and with emblematic figures of Justice, Peace, Labour, &c.; whilst over the doorway is the city coat of arms, with the motto, “Floreat semper fidelis civitas.”  The lower hall contains a collection of interesting specimens of ancient armour, gleaned from the battlefields of Worcester, and one of those quaint old instruments of punishment formerly used for scolds, called a “brank.”  In the municipal hall, on the second floor, is a portrait of George III., who presented it to the inhabitants, and others of citizens who have done good service to the town, or in some way distinguished themselves, the last added being that of Alderman Padmore, one of the members for the city....