Handbook of Home Rule Being articles on the Irish question 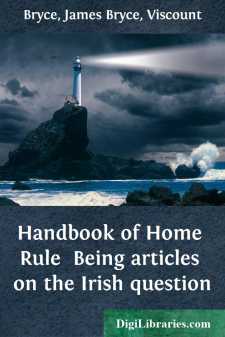 American experience has been frequently cited, in the course of the controversy now raging in England over the Irish question, both by way of warning and of example. For instance, I have found in the Times as well as in other journals—the Spectator, I think, among the number—very contemptuous dismissals of the plan of offering Ireland a government like that of an American State, on the ground that the Americans are loyal to the central authority, while in Ireland there is a strong feeling of hostility to it, which would probably increase under Home Rule. The Queen's writ, it has been remarked, cannot be said to run in large parts of Ireland, while in every part of the United States the Federal writ is implicitly obeyed, and the ministers of Federal authority find ready aid and sympathy from the people. If I remember rightly, the Duke of Argyll has been very emphatic in pointing out the difference between giving local self-government to a community in which the tendencies of popular feeling are "centrifugal," and giving it to one in which these tendencies are "centripetal." The inference to be drawn was, of course, that as long as Ireland disliked the Imperial government the concession of Home Rule would be unsafe, and would only become safe when the Irish people showed somewhat the same sort of affection for the English connection which the people of the State of New York now feel for the Constitution of the United States.

Among the multitude of those who have taken part in the controversy on one side or the other, no one has, so far as I have observed, pointed out that the state of feeling in America toward the central government with which the state of feeling in Ireland towards the British Government is now compared, did not exist when the American Constitution was set up; that the political tendencies in America at that time were centrifugal, not centripetal, and that the extraordinary love and admiration with which Americans now regard the Federal government are the result of eighty years' experience of its working. The first Confederation was as much as the people could bear in the way of surrendering local powers when the War of Independence came to an end. It was its hopeless failure to provide peace and security which led to the framing of the present Constitution. But even with this experience still fresh, the adoption of the Constitution was no easy matter. I shall not burden this article with historical citations showing the very great difficulty which the framers of the Constitution had in inducing the various States to adopt it, or the magnitude and variety of the fears and suspicions with which, many of the most influential men in all parts of the country regarded it. Any one who wishes to know how numerous and diversified these fears and suspicions were, cannot do better than read the series of papers known as "The Federalist," written mainly by Hamilton and Madison, to commend the new plan to the various States. It was adopted almost as a matter of necessity, that is, as the only way out of the Slough of Despond in which the Confederation had plunged the union of the States; but the objections to it which were felt at the beginning were only removed by actual trial. Hamilton's two colleagues, as delegates from New York, Yates and Lansing, withdrew in disgust from the Convention, as soon as the Constitution was outlined, and did not return. The notion that the Constitution was produced by the craving of the American people for something of that sort to love and revere, and that it was not bestowed on them until they had given ample assurance that they would lavish affection on it, has no foundation whatever in fact. The devotion of Americans to the Union is, indeed, as clear a case of cause and effect as is to be found in political history. They have learned to like the Constitution because the country has prospered under it, and because it has given them all the benefits of national life without interference with local liberties. If they had not set up a central government until the centrifugal sentiment had disappeared from the States, and the feeling of loyalty for a central authority had fully shown itself, they would assuredly never have set it up at all.

Moreover, it has to be borne in mind that the adoption of the Constitution did not involve the surrender of any local franchises, by which the people of the various States set great store....