Halsey & Co. or, The Young Bankers and Speculators 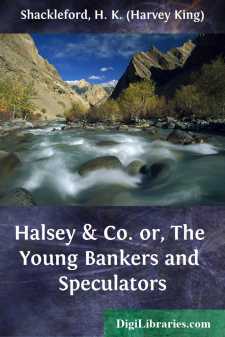 Mr. Barron, the rich banker in Broad street, was seated at his desk in his private office one day when the door was opened by the porter, who said:

"There's a newsboy out here who says he must see you, sir."

"Go and tell him to let you know what he wants. If it's a situation, tell him we have none vacant."

The porter went back to the outer office. In a minute or two the door opened again and the newsboy entered and closed the door behind him. The banker recognized him as the boy who had brought him the afternoon papers daily for a year back.

"The bouncer told me to go away, sir," the boy said, doffing his hat as he spoke, "but I knew my business better than he does. There's a couple of men putting up a big job on your bank, and I knew if I didn't tell you about it they'd scoop you for a big pile."

The banker wheeled his chair around so as to face the boy, and laid his gold glasses on the desk.

"Who are they, and how did you find out about it?" he asked.

"I don't know who they are, but I found it out by overhearing their talk."

"What is their plan?"

"Whose name is forged?"

"I don't know, sir. They had a genuine check and were comparing it to the forged one. They said it was perfect and would be paid if presented when the cashier was busy."

"Ah! I see. That means a little before three o'clock. Now, my boy, do you think you could point them out to a detective when they come up to the cashier's window?"

The banker smiled, reached over on his desk and tapped a small bell. The door opened and a messenger appeared.

"Tell Caruth to come here," the banker said to him.

The messenger disappeared, and a few moments later the bank detective came in.

"Caruth," said the banker, "this boy tells me he overheard two men plotting to present a forged check to-day. Take him out there with you and arrest the man he points out to you. Let the man get the money, though, so as to make a good case against him."

Caruth looked at the boy and said:

"I know you by sight. What's your name?"

"Well, go along with him, Fred," the banker said to him. "It may be a bad business if you make a mistake."

"Come on, Halsey," and the detective led the way out into the public hall of the bank.

Fred followed him, and the two were soon in a crowd of people, who were coming and going all the time. Caruth took up a position near the cashier's window where he could see every man who stopped there. Fred stood by his side and closely scanned the faces of those who came and went.

More than an hour passed, and still they stood there on the watch. The detective was used to it, but Fred had been more active, and he began to wish the men would come along. Suddenly he nudged Caruth with his elbow–nudged him good. Caruth leaned over till his face was on a level with Fred's.

Caruth looked up and saw a man in a gray ulster and with gold glasses on.