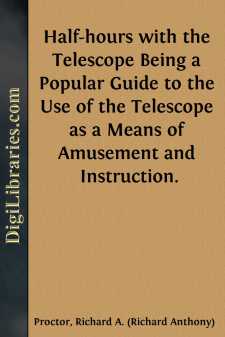 CHAPTER I. A HALF-HOUR ON THE STRUCTURE OF THE TELESCOPE.

There are few instruments which yield more pleasure and instruction than the Telescope. Even a small telescope—only an inch and a half or two inches, perhaps, in aperture—will serve to supply profitable amusement to those who know how to apply its powers. I have often seen with pleasure the surprise with which the performance even of an opera-glass, well steadied, and directed towards certain parts of the heavens, has been witnessed by those who have supposed that nothing but an expensive and colossal telescope could afford any views of interest. But a well-constructed achromatic of two or three inches in aperture will not merely supply amusement and instruction,—it may be made to do useful work.

The student of astronomy is often deterred from telescopic observation by the thought that in a field wherein so many have laboured, with abilities and means perhaps far surpassing those he may possess, he is little likely to reap results of any utility. He argues that, since the planets, stars, and nebulæ have been scanned by Herschel and Rosse, with their gigantic mirrors, and at Pulkova and Greenwich with refractors whose construction has taxed to the utmost the ingenuity of the optician and mechanic, it must be utterly useless for an unpractised observer to direct a telescope of moderate power to the examination of these objects.

Now, passing over the consideration that a small telescope may afford its possessor much pleasure of an intellectual and elevated character, even if he is never able by its means to effect original discoveries, two arguments may be urged in favour of independent telescopic observation. In the first place, the student who wishes to appreciate the facts and theories of astronomy should familiarize himself with the nature of that instrument to which astronomers have been most largely indebted. In the second place, some of the most important discoveries in astronomy have been effected by means of telescopes of moderate power used skilfully and systematically. One instance may suffice to show what can be done in this way. The well-known telescopist Goldschmidt (who commenced astronomical observation at the age of forty-eight, in 1850) added fourteen asteroids to the solar system, not to speak of important discoveries of nebulæ and variable stars, by means of a telescope only five feet in focal length, mounted on a movable tripod stand.

The feeling experienced by those who look through a telescope for the first time,—especially if it is directed upon a planet or nebula—is commonly one of disappointment. They have been told that such and such powers will exhibit Jupiter's belts, Saturn's rings, and the continent-outlines on Mars; yet, though perhaps a higher power is applied, they fail to detect these appearances, and can hardly believe that they are perfectly distinct to the practised eye.

The expectations of the beginner are especially liable to disappointment in one particular. He forms an estimate of the view he is to obtain of a planet by multiplying the apparent diameter of the planet by the magnifying power of his telescope, and comparing the result with the apparent diameter of the sun or moon. Let us suppose, for instance, that on the day of observation Jupiter's apparent diameter is 45", and that the telescopic power applied is 40, then in the telescope Jupiter should appear to have a diameter of 1800", or half a degree, which is about the same as the moon's apparent diameter. But when the observer looks through the telescope he obtains a view—interesting, indeed, and instructive—but very different from what the above calculation would lead him to expect. He sees a disc apparently much smaller than the moon's, and not nearly so well-defined in outline; in a line with the disc's centre there appear three or four minute dots of light, the satellites of the planet; and, perhaps, if the weather is favourable and the observer watchful, he will be able to detect faint traces of belts across the planet's disc.

Yet in such a case the telescope is not in fault. The planet really appears of the estimated size. In fact, it is often possible to prove this in a very simple manner....