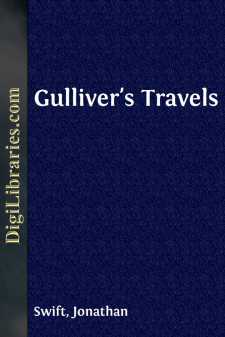 A LETTER FROM CAPTAIN GULLIVER TO HIS COUSIN SYMPSON.

I hope you will be ready to own publicly, whenever you shall be called to it, that by your great and frequent urgency you prevailed on me to publish a very loose and uncorrect account of my travels, with directions to hire some young gentleman of either university to put them in order, and correct the style, as my cousin Dampier did, by my advice, in his book called “A Voyage round the world.”  But I do not remember I gave you power to consent that any thing should be omitted, and much less that any thing should be inserted; therefore, as to the latter, I do here renounce every thing of that kind; particularly a paragraph about her majesty Queen Anne, of most pious and glorious memory; although I did reverence and esteem her more than any of human species.  But you, or your interpolator, ought to have considered, that it was not my inclination, so was it not decent to praise any animal of our composition before my master Houyhnhnm: And besides, the fact was altogether false; for to my knowledge, being in England during some part of her majesty’s reign, she did govern by a chief minister; nay even by two successively, the first whereof was the lord of Godolphin, and the second the lord of Oxford; so that you have made me say the thing that was not.  Likewise in the account of the academy of projectors, and several passages of my discourse to my master Houyhnhnm, you have either omitted some material circumstances, or minced or changed them in such a manner, that I do hardly know my own work.  When I formerly hinted to you something of this in a letter, you were pleased to answer that you were afraid of giving offence; that people in power were very watchful over the press, and apt not only to interpret, but to punish every thing which looked like an innuendo (as I think you call it).  But, pray how could that which I spoke so many years ago, and at about five thousand leagues distance, in another reign, be applied to any of the Yahoos, who now are said to govern the herd; especially at a time when I little thought, or feared, the unhappiness of living under them?  Have not I the most reason to complain, when I see these very Yahoos carried by Houyhnhnms in a vehicle, as if they were brutes, and those the rational creatures?  And indeed to avoid so monstrous and detestable a sight was one principal motive of my retirement hither.

Thus much I thought proper to tell you in relation to yourself, and to the trust I reposed in you.

I do, in the next place, complain of my own great want of judgment, in being prevailed upon by the entreaties and false reasoning of you and some others, very much against my own opinion, to suffer my travels to be published.  Pray bring to your mind how often I desired you to consider, when you insisted on the motive of public good, that the Yahoos were a species of animals utterly incapable of amendment by precept or example: and so it has proved; for, instead of seeing a full stop put to all abuses and corruptions, at least in this little island, as I had reason to expect; behold, after above six months warning, I cannot learn that my book has produced one single effect according to my intentions.  I desired you would let me know, by a letter, when party and faction were extinguished; judges learned and upright; pleaders honest and modest, with some tincture of common sense, and Smithfield blazing with pyramids of law books; the young nobility’s education entirely changed; the physicians banished; the female Yahoos abounding in virtue, honour, truth, and good sense; courts and levees of great ministers thoroughly weeded and swept; wit, merit, and learning rewarded; all disgracers of the press in prose and verse condemned to eat nothing but their own cotton, and quench their thirst with their own ink.  These, and a thousand other reformations, I firmly counted upon by your encouragement; as indeed they were plainly deducible from the precepts delivered in my book.  And it must be owned, that seven months were a sufficient time to correct every vice and folly to which Yahoos are subject, if their natures had been capable of the least disposition to virtue or wisdom.  Yet, so far have you been from answering my expectation in any of your letters; that on the contrary you are loading our carrier every week with libels, and keys, and reflections, and memoirs, and second parts; wherein I see myself accused of reflecting upon great state folk; of degrading human nature (for so they have still the confidence to style it), and of abusing the female sex.  I find likewise that the writers of those bundles are not agreed among themselves; for some of them will not allow me to be the author of my own travels; and others make me author of books to which I am wholly a stranger....