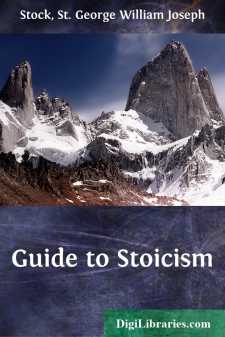 PHILOSOPHY AMONG THE GREEKS AND ROMANS.

Among the Greeks and Romans of the classical age philosophy occupied the place taken by religion among ourselves. Their appeal was to reason not to revelation. To what, asks Cicero in his Offices, are we to look for training in virtue, if not to philosophy? Now, if truth is believed to rest upon authority it is natural that it should be impressed upon the mind from the earliest age, since the essential thing is that it should be believed, but a truth which makes its appeal to reason must be content to wait till reason is developed. We are born into the Eastern, Western or Anglican communion or some other denomination, but it was of his own free choice that the serious minded young Greek or Roman embraced the tenets of one of the great sects which divided the world of philosophy. The motive which led him to do so in the first instance may have been merely the influence of a friend or a discourse from some eloquent speaker, but the choice once made was his own choice, and he adhered to it as such. Conversions from one sect to another were of quite rare occurrence. A certain Dionysius of Heraclea, who went over from the Stoics to the Cyrenaics, was ever afterward known as "the deserter." It was as difficult to be independent in philosophy as it is with us to be independent in politics. When a young man joined a school, he committed himself to all its opinions, not only as to the end of life, which was the main point of division, but as to all questions on all subjects. The Stoic did not differ merely in his ethics from the Epicurean; he differed also in his theology and his physics and his metaphysics. Aristotle, as Shakespeare knew, thought young men "unfit to hear moral philosophy". And yet it was a question—or rather the question—of moral philosophy, the answer to which decided the young man's opinions on all other points. The language which Cicero sometimes uses about the seriousness of the choice made in early life and how a young man gets entrammelled by a school before he is really able to judge, reminds us of what we hear said nowadays about the danger of a young man's taking orders before his opinions are formed. To this it was replied that a young man only exercised the right of private judgment in selecting the authority whom he should follow, and, having once done that, trusted to him for all the rest. With the analogue of this contention also we are familiar in modern times. Cicero allows that there would be something in it, if the selection of the true philosopher did not above all things require the philosophic mind. But in those days it was probably the case, as it is now, that, if a man did not form speculative opinions in youth, the pressure of affairs would not leave him leisure to do so later.

The life span of Zeno, the founder of Stoicism, was from B.C. 347 to 275. He did not begin teaching till 315, at the mature age of forty. Aristotle had passed away in 322, and with him closed the great constructive era of Greek thought....