Guide to Life and Literature of the Southwest, with a Few Observations 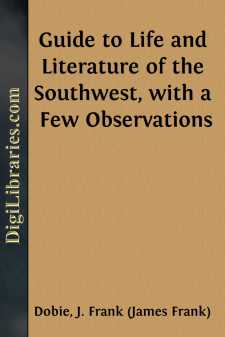 A Preface With Some Revised Ideas

IT HAS BEEN ten years since I wrote the prefatory "Declaration" to this now enlarged and altered book. Not to my generation alone have many things receded during that decade. To the intelligent young as well as to the intelligent elderly, efforts in the present atmosphere to opiate the public with mere pictures of frontier enterprise have a ghastly unreality. The Texas Rangers have come to seem as remote as the Foreign Legion in France fighting against the Kaiser. Yet this Guide, extensively added to and revised, is mainly concerned, apart from the land and its native life, with frontier backgrounds. If during a decade a man does not change his mind on some things and develop new points of view, it is a pretty good sign that his mind is petrified and need no longer be accounted among the living. I have an inclination to rewrite the "Declaration," but maybe I was just as wise on some matters ten years ago as I am now; so I let it stand.

I have heard so much silly bragging by Texans that I now think it would be a blessing to themselves—and a relief to others—if the braggers did not know they lived in Texas. Yet the time is not likely to come when a human being will not be better adapted to his environments by knowing their nature; on the other hand, to study a provincial setting from a provincial point of view is restricting. Nobody should specialize on provincial writings before he has the perspective that only a good deal of good literature and wide history can give. I think it more important that a dweller in the Southwest read The Trial and Death of Socrates than all the books extant on killings by Billy the Kid. I think this dweller will fit his land better by understanding Thomas Jefferson's oath ("I have sworn upon the altar of God eternal hostility against every form of tyranny over the mind of man") than by reading all the books that have been written on ranch lands and people. For any dweller of the Southwest who would have the land soak into him, Wordsworth's "Tintern Abbey," "Ode: Intimations of Immortality," "The Solitary Reaper," "Expostulation and Reply," and a few other poems are more conducive to a "wise passiveness" than any native writing.

There are no substitutes for nobility, beauty, and wisdom. One of the chief impediments to amplitude and intellectual freedom is provincial inbreeding. I am sorry to see writings of the Southwest substituted for noble and beautiful and wise literature to which all people everywhere are inheritors. When I began teaching "Life and Literature of the Southwest" I did not regard these writings as a substitute. To reread most of them would be boresome, though Hamlet, Boswell's Johnson, Lamb's Essays, and other genuine literature remain as quickening as ever.

Very likely I shall not teach the course again. I am positive I shall never revise this Guide again. It is in nowise a bibliography. I have made more additions to the "Range Life" chapter than to any other....