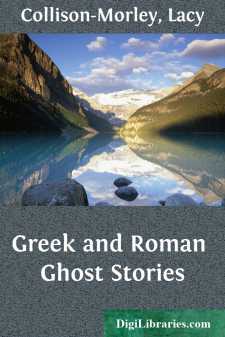 I THE POWER OF THE DEAD TO RETURN TO EARTH

Though there is no period at which the ancients do not seem to have believed in a future life, continual confusion prevails when they come to picture the existence led by man in the other world, as we see from the sixth book of the Æneid. Combined with the elaborate mythology of Greece, we are confronted with the primitive belief of Italy, and doubtless of Greece too—a belief supported by all the religious rites in connection with the dead—that the spirits of the departed lived on in the tomb with the body. As cremation gradually superseded burial, the idea took shape that the soul might have an existence of its own, altogether independent of the body, and a place of abode was assigned to it in a hole in the centre of the earth, where it lived on in eternity with other souls.

This latter view seems to have become the official theory, at least in Italy, in classical days. In the gloomy, horrible Etruscan religion, the shades were supposed to be in charge of the Conductor of the Dead—a repulsive figure, always represented with wings and long, matted hair and a hammer, whose appearance was afterwards imitated in the dress of the man who removed the dead from the arena. Surely something may be said for Gaston Boissier's suggestion that Dante's Tuscan blood may account to some extent for the gruesome imagery of the Inferno.

Cicero tells us that it was generally believed that the dead lived on beneath the earth, and special provision was made for them in every Latin town in the "mundus," a deep trench which was dug before the "pomerium" was traced, and regarded as the particular entrance to the lower world for the dead of the town in question. The trench was vaulted over, so that it might correspond more or less with the sky, a gap being left in the vault which was closed with the stone of the departed—the "lapis manalis." Corn was thrown into the trench, which was filled up with earth, and an altar erected over it. On three solemn days in the year—August 25, October 5, and November 8—the trench was opened and the stone removed, the dead thus once more having free access to the world above, where the usual offerings were made to them.

These provisions clearly show an official belief that death did not create an impassable barrier between the dead and the living. The spirits of the departed still belonged to the city of their birth, and took an interest in their old home. They could even return to it on the days when "the trench of the gods of gloom lies open and the very jaws of hell yawn wide." Their rights must be respected, if evil was to be averted from the State. In fact, the dead were gods with altars of their own, and Cornelia, the mother of the Gracchi, could write to her sons, "You will make offerings to me and invoke your parent as a god." Their cult was closely connected with that of the Lares—the gods of the hearth, which symbolized a fixed abode in contrast with the early nomad life. Indeed, there is practically no distinction between the Lares and the Manes, the souls of the good dead. But the dead had their own festival, the "Dies Parentales," held from the 13th to the 21st of February, in Rome; and in Greece the "Genesia," celebrated on the 5th of Bœdromion, towards the end of September, about which we know very little.

There is nothing more characteristic of paganism than the passionate longing of the average man to perpetuate his memory after death in the world round which all his hopes and aspirations clung. Cicero uses it as an argument for immortality.

Many men left large sums to found colleges to celebrate their memories and feast at their tombs on stated occasions. Lucian laughs at this custom when he represents the soul of the ordinary man in the next world as a mere bodiless shade that vanishes at a touch like smoke....