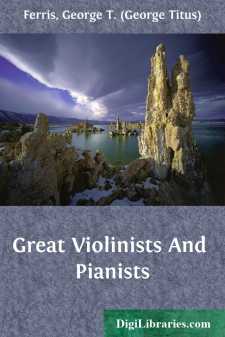 THE VIOLIN AND EARLY VIOLINISTS.

The ancestry of the violin, considering this as the type of stringed instruments played with a bow, goes back to the earliest antiquity; and innumerable passages might be quoted from the Oriental and classical writers illustrating the important part taken by the forefathers of the modern violin in feast, festival, and religious ceremonial, in the fiery delights of battle, and the more dulcet enjoyments of peace. But it was not till the fifteenth century, in Italy, that the art of making instruments of the viol class began to reach toward that high perfection which it speedily attained. The long list of honored names connected with the development of art in the fifteenth, sixteenth, and seventeenth centuries is a mighty roll-call, and among these the names of the great violin-makers, beginning with Gaspard de Salo, of Brescia, who first raised a rude craft to an art, are worthy of being included. From Brescia came the masters who established the Cremona school, a name not only immortal in the history of music, but full of vital significance; for it was not till the violin was perfected, and a distinct school of violin-playing founded, that the creation of the symphony, the highest form of music, became possible.

The violin-makers of Cremona came, as we have said, from Brescia, beginning with the Ama-tis. Though it does not lie within the province of this work to discuss in any special or technical sense the history of violin-making, something concerning the greatest of the Cremona masters will be found both interesting and valuable as preliminary to the sketches of the great players which make up the substance of the volume. The Amatis, who established the violin-making art at Cremona, successively improved, each member of the class stealing a march on his predecessor, until the peerless masters of the art, Antonius Stradiuarius and Joseph Guarnerius del Jesû, advanced far beyond the rivalry of their contemporaries and successors. The pupils of the Amatis, Stradiuarius, and Guarnerius settled in Milan, Florence, and other cities, which also became centers of violin-making, but never to an extent which lessened the preeminence of the great Cremona makers. There was one significant peculiarity of all the leading artists of this violin-making epoch: each one as a pupil never contented himself with making copies of his master's work, but strove incessantly to strike out something in his work which should be an outcome of his own genius, knowledge, and investigation....